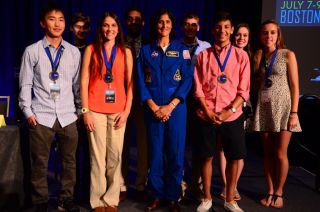 Anna-Sophia Boguraev, 16, of Bedford, New York, won the first ever Genes in Space contest for student experiments on the International Space Station. She can be seen here standing to the left of NASA astronaut Sunita Williams (center). They are joined by other Genes in Space student finalists at the 2015 ISS Research and Development Conference in Boston.
(Image: © Mandi Nyambi and James McNeill )

A 16-year-old New York City-area student will one day see her DNA experiment launched to the International Space Station.

The experiment, designed by Anna-Sophia Boguraev of Bedford, New York just north of NYC, aims to see how microgravity and radiation affect the immune systems of astronauts in space.

Boguraev topped the list for the first-ever Genes in Space competition, which asked students between Grades 7 and 12 to solve an actual space problem using DNA analysis. She won following the final presentations at the ISS Research and Development Conference in Boston in early July. [Quiz: The Reality of Life in Space]

"Immune suppression affects astronaut health during space missions, but the underlying causes are not fully understood," contest officials wrote in a statement. "By interrogating the genetic regulation of the immune system in space, Anna-Sophia hopes to offer new avenues to enhance human health during prolonged spaceflight missions."

Exactly when Anna-Sophia experiment's will launch was not detailed in a Genes in Space announcement, but the she will be invited to the launch to see her experiment rocket into space. Current cargo ships to the International Space Station include Russian Progress vehicles, Japan's HTV-2 spacecraft, SpaceX Dragon capsules and Orbital Sciences' Antares spacecraft.

The competition was co-sponsored by Boeing, Math for America, miniPCR (which has a machine on the station) and the Center for the Advancement of Science in Space, which manages the U.S. laboratory on space station.

According to the Genes in Space announcement, finalists for the contest included:

Anna-Sophia Boguraev (16) from Bedford, New York, who aims to test the effect of microgravity and cosmic radiation on the immune system in space.

Jonathan Chang (17) and Thiago Bandeira (16) from Sammamish, Wash., who submitted an experiment to test the damage caused to DNA by OU-20 bacteria, which can survive on the exterior of the International Space Station.

Alyssa Huff (16) from State College, Pennsylvania, who would like to use PCR on the International Space Station to develop a detection method for extraterrestrial life by testing natural and unnatural genetic material in space.

Tarun Srinivasan (17) from Houston, Texas, who designed an experiment to test the compositional changes to the bacteria in an astronaut’s body (microbiome) before, during, and after a journey to space.

To learn more about the Genes in Space contest, visit: www.genesinspace.org.