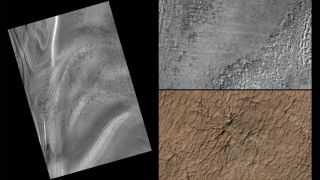 These images from NASA's Mars Reconnaissance Orbiter zoom into "spider" features, which are channels carved in the surface in radial patterns, located in the south polar region of Mars.
(Image: © NASA/JPL-Caltech/MSSS/Univ. of Arizona)

Science enthusiasts around the world have a unique opportunity to help NASA learn more about Mars.

Members of NASA's Mars Reconnaissance Orbiter (MRO) science team are asking the public to help them categorize strange features near the Red Planet's south pole for further study and analysis.

Those who join the effort will review photos of the region captured by MRO's Context Camera (CTX), identifying areas that deserve more detailed scrutiny by the orbiter's High Resolution Imaging Science Experiment (HiRISE) camera. HiRISE has a resolution of about 20 inches (50 centimeters) per pixel, compared to 20 feet (6 m) per pixel for CTX, NASA officials said.

Volunteers should see some interesting features in the CTX images, thanks to the seasonal thawing and freezing of carbon-dioxide ice (also known as dry ice) in the Martian polar regions.

"In the spring, the dry ice turns to gas and carves unusual features in the Mars surface, resulting in exotic terrains described informally as 'spiders,' 'Swiss cheese' and 'channel networks,'" HiRISE deputy principal investigator Candice Hansen, of the Planetary Science Institute in Tucson, Arizona, said in a statement.

You can learn more about the project — including how to participate — at the "Planet Four: Terrains" website here: http://terrains.planetfour.org

Planet Four: Terrains is a new site associated with Zooniverse, an organization that seeks to set researchers up with citizen-science volunteers. Zooniverse currently hosts 30 projects in fields ranging from astronomy to zoology, NASA officials said.

The $720 million MRO mission launched in August 2005 and arrived in orbit around Mars in March 2006. The spacecraft is studying the Red Planet with six different instruments and also serves as an important communications link between Earth and NASA's two operational Mars rovers, Opportunity and Curiosity.

MRO isn't the only active spacecraft in Mars orbit. NASA's Mars Odyssey and MAVEN probes are also observing the Red Planet from above, as are India's Mangalyaan and Europe's Mars Express spacecraft.