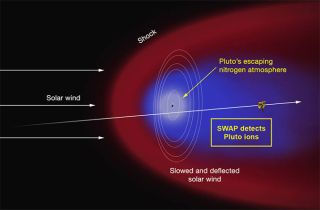 Not only has NASA's New Horizons mission confirmed that Pluto has an extended atmosphere, after its historic flyby on July 14, the spacecraft observed a "cavity" in the solar wind, revealing a long plasma tail reminiscent of a comet's ion tail extending from the dwarf planet.

Pluto may be 40 times further away from the sun than Earth, but that certainly doesn't mean that it isn't influenced by the solar wind — a stream of ionized particles spiraling away from the sun. As the solar wind interacts with Pluto, it appears that the small world's tenuous atmosphere is "blown back," and lost to space, forming a long tail between 48,000 miles (77,000 km) and 68,000 miles (109,000 km) long.

Similar features are known to exist at Mars and Venus — the lack of a global magnetic field allows the solar wind's continuous erosion to strip atmospheric gases into space. In the case of Pluto, New Horizons' Pluto Energetic Particle Spectrometer Science Investigation (PEPSSI) instrument detected nitrogen ions before the mission made close approach and the Solar Wind Around Pluto (SWAP) instrument detected the solar wind cavity, revealing it was filled with these nitrogen ions.

These early results suggest that Pluto's predominantly nitrogen atmosphere is being ionized by ultraviolet light from the sun and then the ions are "picked up" by the solar wind, creating the long tail.

"This is just a first tantalizing look at Pluto's plasma environment," said Fran Bagenal, of the University of Colorado, Boulder, who leads the New Horizons Particles and Plasma team. "We'll be getting more data in August, which we can combine with the Alice and Rex atmospheric measurements to pin down the rate at which Pluto is losing its atmosphere. Once we know that, we'll be able to answer outstanding questions about the evolution of Pluto's atmosphere and surface and determine to what extent Pluto's solar wind interaction is like that of Mars."