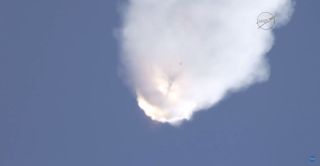 SpaceX's Falcon 9 rocket and Dragon cargo spacecraft broke up shortly after liftoff on June 28. Elon Musk, SpaceX's founder and CEO, said the company does not yet know what caused the anomaly.
(Image: © NASA TV/Space.com)

Elon Musk has been speaking with reporters about the June 28 explosion of a SpaceX Falcon 9 rocket, but the company CEO has not been able to offer any insight as to what went wrong.

While attending a conference event in Sun Valley, Idaho, Musk told reporters that he and his company did not yet know what caused the June 28 failure of a Falcon 9 rocket, which exploded a few minutes after liftoff. The rocket was carrying a Dragon cargo capsule filled with supplies for the International Space Station.

Asked when the company would launch again, Musk said he did not know. SpaceX has been certified for launching national security space missions, but must compete for contracts with the department of defense, which Musk said the company will do "hopefully later this year."

"I think we need to understand exactly what went wrong and what needs to be done to fix it," Musk said of the June 28 anomaly in an interview with CNBC and other reporters. "We're going to be very deliberate about it. We want to look at, of course, what went wrong, but also take thorough review of the data and see if there were any near misses — could there have been something else that might have gone wrong and what we need to do to fix that."

SpaceX has not released any more information about the event, but Musk has indicated that whatever caused the failure was complicated. In Idaho, he told reporters that whatever happened was a "very tricky thing."

Musk told an audience at the International Space Station Research and Development conference in Boston that "there is still no clear theory that fits all the data," according to the Boston Globe. At that same event, Musk said, "The data does seem to be quite difficult to interpret," and that "Whatever happened was not straightforward," according to the website The Verge.

Video coverage of the June 28 launch shows the rocket and its payload lifting off from the launch pad successfully. About two minutes later, the rocket began to release large clouds of smoke that obscured it; seconds later, the smoke began to dissipate, but no rocket could be seen — only a shower of debris.

"The goal is to have the most reliable rocket ever," Musk said in Idaho. "Because this is going to be launching astronauts in a couple of years, so it needs to be super, super reliable."

In the wake of the incident, SpaceX has delayed any future launches, the news website Spaceflight Now reported last month.

SpaceX has a $1.6 billion dollar contract with NASA to fly at least 12 unmanned cargo runs to the International Space Station. The June 28 launch would have been the company's seventh cargo mission. NASA Administrator Charles Bolden issued a statement shortly after the June 28 failure, announcing NASA's support of SpaceX.

"SpaceX has demonstrated extraordinary capabilities in its first six cargo resupply missions to the station, and we know they can replicate that success," Bolden said in a statement. "We will work with and support SpaceX to assess what happened, understand the specifics of the failure and correct it to move forward. This is a reminder that spaceflight is an incredible challenge, but we learn from each success and each setback. Today's launch attempt will not deter us from our ambitious human spaceflight program."