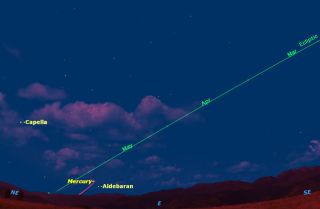 Unless you’re paying close attention to the sky, you’re likely to miss the current apparition of Mercury. In the Northern Hemisphere, Mercury can be seen half an hour before sunrise.
(Image: © Starry Night Software)

Mercury is a difficult object to spot, because it's always clinging closely to the sun’s apron strings. So you might be excused for missing its brief appearance this week in the predawn skies.

After many attempts to observe Mercury, I’ve found that the best time to spot it is about half an hour before sunrise in the morning sky, or half an hour after sunset in the evening sky. It’s always a balancing act between Mercury’s low altitude and the brightness of the background sky. I find 7x50 or 10x50 binoculars helpful in spotting Mercury, though once I’ve located Mercury in binoculars I usually have no trouble seeing it with the naked eye.

The tilt of the ecliptic would indicate that this current morning apparition — which runs through the next week or so — favors southern observers, but as you can see from these two views, it really isn’t much different; catching Mercury this week will be a challenge for observers everywhere in the world.

The tilt this week also favors southern observers, as you can see in the charts. On them, Mercury’s orbit is marked in red and the ecliptic in green — but even this doesn’t help much.

So if you are successful in spotting Mercury in the next few days, congratulate yourself, and let us know here at Space.com.

Editor's note: If you capture an amazing view of Mercury or any other night sky sight that you'd like to share with Space.com, send photos and comments in to: spacephotos@space.com.