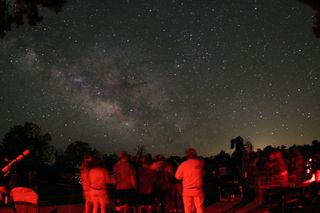 Michael Sainato is a freelancer with credits including the Miami Herald, Huffington Post and The Hill. Follow him on Twitter at @msainat1. Sainato contributed this article to Space.com's Expert Voices: Op-Ed & Insights.

Grand Canyon National Park has some of the clearest night skies in Arizona, hours away from urban environments and thousands of feet above sea level.

Back in the late 1970s, the San Francisco Sidewalk Astronomers began setting up telescopes in the park for public use. The organizer, John Dobson, would give Twilight Talks, introductory astronomy lectures for the, at sunset, while amateur astronomers set up their telescopes. After one of the talks went on a tangent about evolution, complaints to the park superintendent forced the site to revoke permission for the event, and the large star parties disappeared from the Grand Canyon — for a time. [Best Night Sky Events of June 2015 (Stargazing Maps )]

In 1990, Dean Ketelsen, technical expert at the University of Arizona's Steward Observatory, passed through the Grand Canyon on his honeymoon in 1990 with a pair of Japanese battleship binoculars — large, high-power binoculars originally built to see ships on the ocean's horizon, well enough to differentiate friend from foe. The binoculars lured a line of tourists eager to use them.

The popularity inspired Ketelsen to ask the park for permission to revive what the San Francisco Sidewalk Astronomers used to do, and restart public star observing at Grand Canyon National Park.

The result was the first Grand Canyon Star Party on the Ketelsens' first wedding anniversary in 1991, held one week in June every year at both the south and north rims of the Grand Canyon.

"These days people don't get to see wilderness skies; they're lucky to see just a few stars in light polluted urban areas," said Ketelsen. "The star party provides people a chance to get a perspective on our place in the universe and see a part of Grand Canyon National Park they're not used to seeing, one of the last remaining dark skies in this country. ... In the 90s, I had to type up letters and do mass mailings to promote the event. Now with the internet and the following of regulars to the event, it basically sets itself up as a great resource for the park, and a summer vacation tradition." [Skywatching In Radio Is 24 Hours A Day (and Psychedelic)  ]

This year's Star Party has been taking place from June 13 to June 20 and features constellation tours and astronomy demonstrations on topics such as the formation of black holes and stars.

"Whether someone comes just to appreciate the beauty of the sky or has an affinity for the science involved, the information the sky provides opens horizons to the definition of life," said Jim O'Connor of the Tucson Amateur Astronomy Association, who took over running the event from Dean Ketelsen six years ago. "Different cultures have been looking out into the sky and using it for thousands of years and people should come see what we do here to experience why that has been the case."