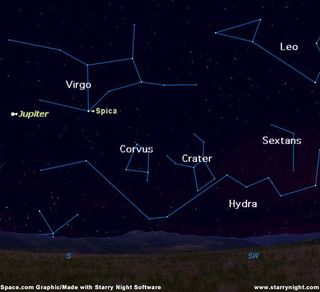 Sky map showing the locations of the constellations Hydra, Corvus (the Crow) and Crater (the Cup).
(Image: © Map provided by Starry Night Software.)

There are quite a few varieties of birds portrayed among the constellations.

The night sky features a swan, an eagle, a dove, a crane, a toucan, a peacock, a bird of paradise and even a mythical phoenix. And over toward the south as night falls during these late spring evenings is yet another: Corvus, the Crow.

Aside from the famous Sickle of Leo, Corvus is probably the most striking star pattern in the springtime southern sky for those living at midnorthern latitudes. Corvus appears as a small, moderately bright quadrilateral-shaped pattern of stars, like a triangle whose top has been removed by a slanting cut. Add a fainter, adjoining star, and — at least to me — this pattern of stars better resembles the battened mainsail of a Chinese junk. [Best Constellations in June's Sky Explained (Video)]

My Space.com colleague Geoff Gaherty also has an affinity for Corvus.

"Corvus is a special favorite of mine," Gaherty said. "The astronomy club I belonged to as a teenager had an old British gentleman named Edgar Bridgen, who was their expert on constellation lore. He claimed that British sailors used to call Corvus 'Spica's Spanker' because of its resemblance to a lug-rigged type of sail specifically known as a 'spanker.' Indeed, Corvus can also be used to positively identify the bluish first-magnitude star Spica, in Virgo. Just follow the direction of Corvus' slanting top to the east (to the left) and you will soon arrive at Spica."

Gaherty shares my impression of the constellation's shape.

"Corvus always looked to me more like a sail than a crow!" he said.

Corvus is supposed to represent the unfaithful raven of the Greek god Apollo. The bird was sent out with a cup for some water, but instead loitered at a fig tree until the fruit became ripe. He then returned to Apollo without the cup, but with a water snake in his claws, alleging the snake to be the cause of his delay.

As punishment, the angry Apollo changed Corvus from silvery white to the black color that crows and ravens bear to this day. In addition, Corvus was forever fixed in the sky along with the Cup (Crater) and the Snake (Hydra), doomed to everlasting thirst as the Hydra stood guard over the Cup and its contents.

The Cup is a small and rather faint figure whose shape actually corresponds quite closely to its name. Its stars outline a goblet, but unfortunately they're hard to distinguish when the sky is hazy or when the moon is bright. That's a pity, for if Crater were just a bit brighter, I think it would be among the better-known constellations.

But as I previously noted, even at its highest, the Cross remains out of sight below the horizon for viewers everywhere in the United States except Hawaii and the Florida Keys. Thus, Corvus reveals the position of a constellation whose name is known to almost everyone, though it's invisible to many of us.