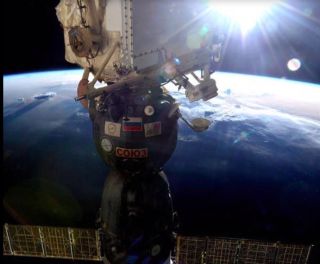 A Russian Soyuz spacecraft is scheduled to bring three International Space Station crewmembers back to Earth on June 11, 2015.
(Image: © NASA)

Russian flight controllers quickly fixed the Soyuz issue, NASA officials said in an update today (June 10). The incident posed no threat to the station's six crewmembers, and it will not affect plans to return three of these spaceflyers to Earth early Thursday (June 11), officials added.

NASA astronaut Terry Virts, cosmonaut Anton Shkaplerov and European Space Agency astronaut Samantha Cristoforetti are scheduled to depart the orbiting lab in a Soyuz Thursday at 6:20 a.m. EDT (1020 GMT) and land on the steppes of Kazakhstan about 3 1/2 hours later, at 9:43 a.m EDT (1343 GMT). You can watch the undocking and landing activities live here at Space.com beginning at 6 a.m. EDT (1000 GMT), courtesy of NASA TV.

Virts handed over command of the International Space Station to cosmonaut Gennady Padalka this morning, marking the official end of the orbiting lab's Expedition 43 and the start of Expedition 44.

The other members of Expedition 44 are cosmonaut Mikhail Kornienko and NASA astronaut Scott Kelly, both of whom are embarked on a historic yearlong mission aboard the orbiting lab. (Padalka is serving the traditional six-month stint.)

Expedition 44 will get up to full strength next month, when cosmonaut Oleg Kononenko, NASA astronaut Kjell Lindgren and Japan's Kimiya Yui arrive at the orbiting lab.