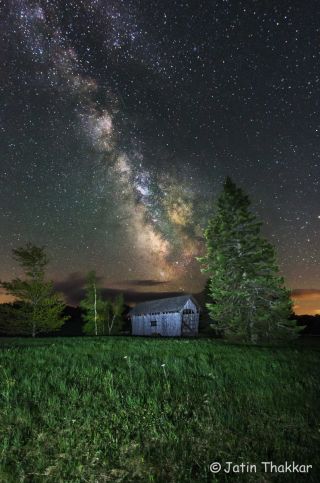 Astrophotographer Jatin Thakkar sent in a photo of the Milky Way over the A. M. Foster Covered Bridge in Cabot, Vermont, taken May 23, 2015.
(Image: © Jatin Thakkar)

The Milky Way glows over a covered bridge in this amazing photo by a veteran astrophotographer in Vermont.

Night sky photographer and Space.com reader Jatin Thakkar captured the night sky along with the A. M. Foster Covered Bridge in Cabot, Vermont, about 10 miles (16 kilometers) east of Montpelier in the northern part of the state.

According to the Cabot Historical Society, the covered bridge was built in 1988 by Richard Spaulding and named after his great-grandfather who had owned the land, Maple Glen Farm, located on Cabot Plains Road in Cabot. The bridge replicates the Martin Bridge (formerly known as the Orton Bridge) in Marshfield. [Amazing Photos of Our Milky Way Galaxy]

This area of Vermont is very dark, and on a clear night a naked-eye observer can clearly see the Milky Way.

"This place is about 3 hours one way from the place I live. It was windy and cloudy during the day, and [the weather] was predicted to be a clear sky after 10 pm," Thakkar wrote in an email to Space.com.

Thakkar took the chance and started his trip. Around 12:30 a.m. EDT, when he reached the location, a big cloud rushed in and covered the galaxy core and Milky Way. Thakkar waited for about 90 minutes until finally the clouds moved away. By 2 a.m. EDT, the Milky Way had risen to a vertical position.

"That is exactly how I wanted to shoot it with the bridge," Thakkar said. "I set up my gear, set up the camera, took [a] couple of shots and finally headed back to home."

Editor's note: If you have an amazing skywatching photo you'd like to share for a possible story or image gallery, send images and comments in to Space.com at spacephotos@space.com.