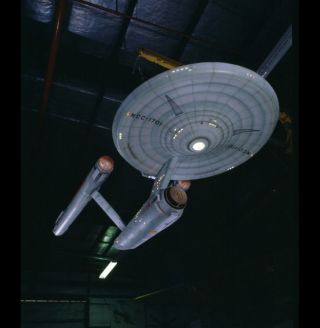 This model of the starship Enterprise was used in the original "Star Trek" TV series, which aired from 1966 to 1969.
(Image: © National Air and Space Museum)

A group of dedicated "Star Trek" fans want to make a new movie, featuring a character from "The "Original Series" who was captain of the Enterprise before James T. Kirk. And they plan to have experienced "Star Trek" actors taking part.

Christopher Pike was featured in the first pilot episode of the original "Star Trek" TV show. That episode, called "The Cage," concerns a mission in the year 2254, when Captain Pike and his crew are leaving the planet Rigel VII, where several team members were killed.

"The incident filled Pike with so much guilt that he is considering resigning his commission. But that's all we know about Captain Pike, and we want to know so much more. Don't you?" the group's Kickstarter page reads.

"This is the story of Captain Pike when he first takes command of the Enterprise and his first mission aboard her," it adds. "And with your help, it will lead into a 90-minute Captain Pike film or Web Series."

Rigel 7 Productions says "Encounter at Rigel" wouldanswer three questions raised by "The Cage" pilot episode: What happened to Pike's first officer and science officer (Mr. Spock) on the first mission; if Pike ever went into battle; and what alien race he encountered.

Pike will be played by Todd Shawn Tei, the producer of the show. The cast also includes Robert Picardo, who played The Doctor on "Star Trek: Voyager."

The funds will go toward payments for items such as set construction, filming, actors and make-up, with a small portion going to charity, project representatives said.

Paramount Pictures, which is working on a third film in the rebooted "Star Trek" series in Hollywood, allows "Star Trek" fan productions to go forward as long as those projects do not make a profit. Last year, another project called "Star Trek: Axanar" warped well past its crowdfunding goal on Kickstarter.