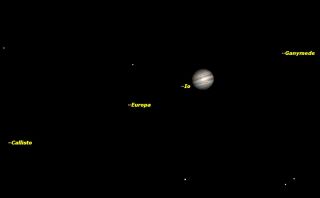 Jupiter is well-placed for viewing during April 2015. It is in the constellation Cancer all month and can be spotted in the evening sky.
(Image: © Starry Night Software)

On Saturday and Sunday, you can finish the day by stepping outside and enjoying a view of the rendezvous of two of the brightest objects in the night sky — the moon and the planet Jupiter.

About 45 minutes after the sun sets on both nights, the eye-catching celestial duo will be visible in the southwest sky, roughly two-thirds of the way up from the horizon to the point directly overhead (called the zenith).

The moon will officially reach first-quarter phase on Saturday evening (April 25) at 7:55 p.m. EDT (2355 GMT). The terminator — the line separating the light half of the moon (on the right) from the dark half — will appear perfectly straight, and Jupiter will be about 9 degrees above and to the left of the moon's left. (Reminder: Your clenched fist held at arm's length measures about 10 degrees.)

On Sunday evening (April 26), the two celestial bodies will be just 8 degrees apart. But on that day, the moon will be in a waxing gibbous phase and will be situated to the lower left of Jupiter.

Even without the moon, Jupiter readily attracts attention: At about magnitude minus 2.1, the gas giant outshines everything in the night sky except Venus and the moon. These days, Jupiter first comes into view high in the southwest during the early stages of twilight and sets at around 2:45 a.m. local daylight time.

In a telescope, Jupiter is a prime attraction, best observed during early evening when it's still high and its image reasonably calm. The giant planet appears as a great, big, belted ball showing tantalizing glimpses of detail. Admittedly, Jupiter currently appears only 75 percent as big as it did at opposition in early February, but don't let that stop you from searching for the planet. The quirks of atmospheric conditions, which can change from minute to minute, often make a bigger difference in what a telescope will show of Jupiter than does the planet's apparent size.  And Jupiter's four bright Galilean moons (Ganymede, Callisto, Io and Europa) are always performing.

Finally, take note of this: Jupiter is now just two months away from a spectacularly close conjunction with Venus, which will occur on July 1.