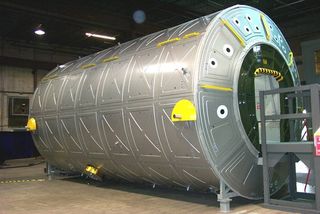 A full scale replica of the International Space Station's Destiny science module has been sold by Spacehab, Inc. to the Museum of Flight in Seattle, Washington.
(Image: © Spacehab, Inc.)

Despitetheir name, the Museum of Flight in Seattle, Washington cannot fly all its visitors to the International SpaceStation. Thus, they've decided to do the next best thing: bring the outpost tothe guests.

In a deal announced on Sept. 13, the museum has purchased a full-scale, high-fidelityreplica of the station's U.S. Destiny laboratory from Spacehab, Inc., agovernment contractor best known for providing shuttle cargo modules to NASA.

"We are delighted that we have been able to procure this exemplary exhibitfrom Spacehab," Dr. Bonnie Dunbar, a five-time retired astronaut and Presidentof the Museum of Flight, said in a press statement. "The Destiny exhibit willbe our cornerstone piece for expanding our aerospace displays."

The museum is one of the largest in the world dedicated to air and space artifactswith more 150 air- and space- craft, including an SR-71 Blackbird spy plane, aConcorde supersonic passenger jet and the first Air Force One.

The Spacehab-built replica mimics the real module, which was built by The BoeingCompany and launched on-board space shuttle Atlantis in 2001.

Like its on-orbit twin, the one-of-a-kind mockup measures approximately 28 feetlong and 14 feet in diameter. It is outfitted with the same facilities as thereal module located 220 miles above Earth, including an astronaut rest cabin, treadmill,experiment chamber ("glove box"), and storage cabinets.

Where the Spacehab creation differs from Destiny is in its added features, whichwere designed to provide museum visitors with both internal and external sightsand sounds.

While both versions of the lab have a 20-inch window, the replica's is augmentedby a flat panel display with Earth views. The mockup also has an integratedaudio system.

Destiny was designed for zero-gravity and as such uses all four walls as workspaces.To compensate, Spacehab built their module with a walk-on, see-through floor sothat visitors 'float' above the fourth wall.

Weighing more than 20,000 pounds, Spacehab's Destiny breaks apart into five sectionsfor crated shipping. The Museum of Flight is expecting its delivery by the end of October and thenwill take several months for assembly.

According to Spacehab, the museum is planning special events and a gala to kickoffthe exhibit by spring of 2007.

Spacehab originally built the replica several years ago at the request of a museumin Japan. When the funding fell through, theHouston-based company listed the lab on its subsidiary's website, The SpaceStore, for $1.65 million.

When the online advertisement failed to attract a buyer, Spacehab turned to themuseum community.

"We looked at a variety of museums that we felt could benefit fromthis," Kimberly Campbell, Spacehab's Vice President for CorporateMarketing and Communications, told collectSPACE.com."We went to [the Museum of Flight] and they said 'Absolutely, this is a great addition.' Mostmuseums need to go through a series of [meetings] with their founders and boardsto determine how they're going to fund new exhibits, so that process took alittle time."

While the exact price has not been released, the Museum of Flight did not pay the full price promotedonline.

"If you were to ask us to build one just like, it would be closer to, or alittle above the million dollar price tag but that is not what we sold it for,"said Campbell. "But when you add up what wesold it for and some of the original funding that we received [from theJapanese museum] it is still close to that amount."

This is not the first replica Spacehab has built of Destiny, but it is the mostdetailed.

"We have a lot of experience building mockups in the past for NASA for the[Johnson Space Center's] Neutral Buoyancy Lab andBuilding 9 mockup facility," said Campbell of the agency's astronaut training facilities. "The one we built[for the museum], although modified to have tourists continually walkingthrough it, has a lot more [detail] to it than I believe you will find inBuilding 9's [mockup]."

The actual Destiny module is the primary research lab for U.S. experiments aboard the station. Unlike artifactsfrom previous spaceflight missions, which have served second lives as popularmuseum exhibits, Destiny (and the
other station modules) will never return intact to earth for future displays.