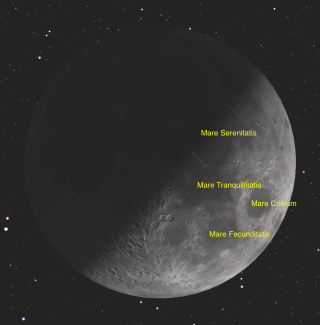 The moon reaches its first-quarter phase on Friday night (March 27), the best time for observing it with binoculars or a small telescope.
(Image: © Starry Night Software)

Beginning skywatchers often think that the best time to look at the moon is when it is full, but experienced observers know that the moon is at its best for observing when it is around its first-quarter phase.

Light hits the moon obliquely, casting its surface relief into high contrast when the Earth's natural satellite is at its first quarter. Weather permitting, you can see this for yourself this week because the first quarter falls on Friday (March 27) at 3:43 a.m. EDT (0743 GMT).

When you look at the moon with binoculars or a small telescope, the first thing you notice is that not all parts of the moon look the same. The surface divides itself into two main types: large level gray areas and smaller mountainous white areas. [Best Night Sky Events of March 2015 (Sky Maps)]

Early moon observers thought the flat gray areas were seas, and named them accordingly. Nowadays we know that these are flat, airless, waterless plains, actually "seas" of cooled lava. They are the scars left by the impact of large asteroids during the early history of the moon. In some places, the lava has washed over and around smaller craters caused by earlier impacts.

The white highlands do include many mountains, but their most distinctive feature is the hundreds of craters left by the impacts of smaller asteroids. The Earth is similarly scarred by asteroid impacts, but millions of years of erosion by wind and rain have left only a few vestiges of these scars. On the moon, the craters have survived unscathed for millions of years.

The moon is the only cosmic object on which we can see a vast amount of surface detail. As a result, astronomers have given names to many of the thousands of surface features visible in even the smallest telescopes.

The largest features on the moon are the seas already mentioned, and even one "ocean." These are known by their Latin names mare, plural maria, and oceanus. At first quarter, the most prominent maria are Mare Serenitatis (Sea of Serenity), Mare Tranquillitatis (Sea of Tranquillity) and Mare Fecunditatis (Sea of Fecundity), which form a linked chain from north to south, and the Mare Crisium (Sea of Crises), which stands alone like a gigantic crater close to the limb (edge) of the moon. It is noticeable that the seas are mainly on the northern half of the moon's face, while the highlands are mostly on its southern half.

The most common features on the moon's surface are craters. These come in many sizes, from more than 100 kilometers (62 miles) across, to tiny pits invisible even in the largest telescopes. The craters are so numerous that, when you examine the moon's surface at high magnifications with a good telescope, it appears pitted everywhere like a pumice stone.

The largest craters on the moon are named after famous scientists, mostly astronomers. Many craters have high terraced walls and central peaks, similar to the Barringer Meteor Crater in northern Arizona. Others, typically the largest craters, have relatively flat, featureless floors, where lava has welled up and filled the center of the crater. [Best Binoculars of 2015]

There are many mountains on the moon, some isolated peaks, such as are seen in the Mare Imbrium (Sea of Rains), some conjoined in great mountain ranges. The surface of the maria and larger craters are sometimes disturbed by raised ridges, called dorsa, singular dorsum, and shallow grooves, or rilles, called rimae, singular rima. Most of these have names, too.

There are well over a thousand named features on the moon's surface, and many amateur astronomers get pleasure from learning their names and origins. To this end, there are many atlases and books of maps available, and you can spend as much time learning the geography of the moon as you spend learning the constellations of stars.

My favorite lunar map is the Sky & Telescope "Field Map of the Moon." This map, by distinguished Czech cartographer Antonín Rükl, covers the moon in four maps that are laminated in plastic and folded together. It is also available in a mirror-image edition for those using telescopes with diagonals. These maps contain enough detail to satisfy all but the most dedicated lunar observer, yet are in a very convenient format for use at the telescope.

Many beginners are surprised at how bright the moon appears in a telescope. This brightness can be tamed by increasing the telescope's magnification, or by lighting the area where your telescope is located. I don't recommend the use of so-called "moon filters," as these are often of poor optical quality or give the moon an odd green color. Even when full, the moon is no brighter than a distant mountainside on Earth. I also don't recommend using the aperture caps supplied with some telescopes. The moon has such a wealth of detail that you want all the resolution your telescope is capable of.

Even if you don't have a telescope, many of the larger features of the moon are visible in binoculars. Without any optical aid at all, you can see the patterns formed by gray maria and white highlands, the familiar shapes known as "the man in the moon," but also seen as different shapes by different cultures. With the unaided eye you can see more detail in the moon than a small telescope will show you on any of the planets.

Editor's note: If you have an amazing skywatching photo of the moon or any other cosmic view you'd like to share for a possible story or image gallery, please contact managing editor Tariq Malik at spacephotos@space.com.