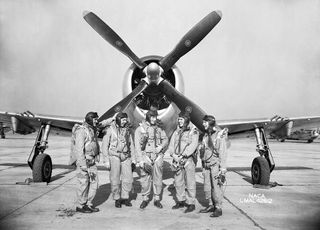 NASA is celebrating the 100-year anniversary of its predecessor, NACA — the National Advisory Committee for Aeronautics — and you can watch the celebration live online today (March 4).

The NACA celebration kicked off Tuesday, but NASA will host another full day of panels and speakers discussing the history and future of the space agency. Today's panels include a keynote speech by John D. Anderson, of the National Air and Space Museum, a panel about NACA research and another about "the next assignment." Watch those NACA panels and others live on Space.com via NASA TV starting at 9:10 a.m. EST (1410 GMT).

"The NACA was formed because our nation's leaders were concerned the U.S. was losing its edge in aviation technology to Europe, where World War 1 was raging on," NASA administrator Charles Bolden said in a statement. "Its mission, in part, was to 'supervise and direct the scientific study of the problems of flight with a view to their practical solution.' As you all know, we not only regained that edge, but we became the world leaders in civil aviation."

Check out the full schedule of events below. All times in EST.