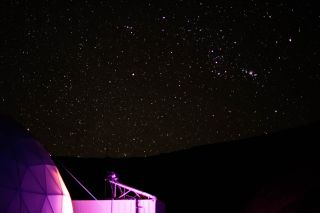 Put six people into an isolated environment for months at a time, and lots of things can happen: frustration, conflict, or at best — a tight-knit group of people working happily for a common goal.

NASA officials are hoping for this latter scenario when assigning crews to future Mars missions sometime in the future. (Otherwise it will be a very long journey for all involved.) To that end, the space agency is now gathering information during a simulated Mars mission in Hawaii.

The facility is called HI-SEAS (Hawaii Space Exploration Analog and Simulation), and it is currently hosting its third crew on an eight-month mission, the longest yet for the project. NASA is examining the daily lives of the crew to see how they're coping in a harsh and isolated environment, and to improve the agency's plans for future long missions in space, according to the crew's chief scientist. [9 Coolest Mock Space Missions]

"In part, this study is attempting to answer long-standing questions about the ideal crew composition for handling the challenges of a long-duration mission," Jocelyn Dunn told Space.com via e-mail. The crew limits real-time conversations to simulate the communications delays between Earth and Mars.

The crew set a record for HI-SEAS simulations on Feb. 12, when the six crewmembers passed the halfway point of their eight-month mission. Previous missions have gone no more than four months at a time.

Dunn said it took the crew a month to get acclimatized to their new home, between learning the systems, figuring out the most efficient way to conduct NASA's studies, and making sure the habitat was organized.

"By month two, we found solace in establishing some daily and weekly routines," Dunn added. "The mission continues to be extremely busy, but we have adjusted to the pace of life here."

While crew morale is strong now, Dunn said there are studies showing a "third-quarter phenomenon" for long-duration missions. Some research shows that crew morale dips the lowest during this period, although not all studies have found this. Factors include the novelty wearing off and the realization that the mission isn't over yet, Dunn said.

"We are cognizant that, thus far, work ethic and physical health have been critical components to our personal well-being and social participation has been central to our team chemistry," Dunn said. "Crewmembers are the happiest when occupied with rigorous research projects, staying on track with workouts to improve physical health, and maintaining life-balance with social participation."

A day in the life

The crew performs about 40 tasks per week for research studies, Dunn said. And NASA isn't the only agency examining the mock Mars explorers. Universities like Johns Hopkins, Michigan State, Cornell and Dartmouth (in Canada), are also participating.

Some of the experiments include investigations into 3D printing, robotics, better propellants for a Mars mission, and detecting health and stress of crew members autonomously. For the latter experiment, they often don biometric shirts — called "Hexoskin" — which automatically send information based on what the sensors find.

To keep the crew aware of each other's activities, every Sunday they have a weekly debrief over brunch. They also do many activities together, including watching movies, playing board games, and doing mock "spacewalks" at night to perform astrophotography.

"It is disorienting to realize that we have already been living here in the habitat for four months. Of course, we miss our families, friends, and fun events back home, but, so far, the crew is enjoying our time here and is not eager to leave," Dunn wrote. "Though ultimately NASA researchers will decide what is the 'right stuff' for an astronaut crew on the long journey of Mars exploration, we are proud to be contributing to this research and believe that we have what it takes to emerge from the third quarter as a happy and cohesive group."