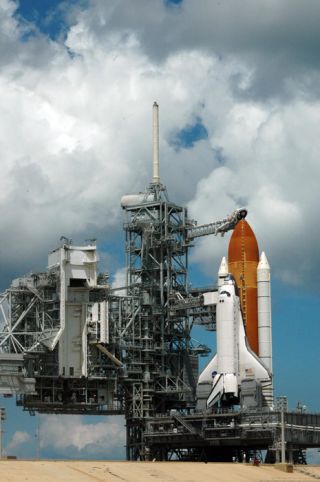 Huge clouds roll over Launch Pad 39B where Space Shuttle Atlantis still sits after a Sept. 6 scrub of its launch on mission STS-115.
(Image: © NASA/Ken Thornsley.)

For thesecond time in three days, Atlantis stood down from a plannedmid-day liftoff due to technical issues. The spacecraft's STS-115astronauts - commanded by veteran spaceflyer BrentJett - were buckled inside Atlantis and set to launch spaceward at 11:40:37a.m. EDT (1540:37 GMT) before shuttle managers scrubbed the attempted spaceshot.

"We had alot discussion...and we follow the rules," NASA launch director Michael Leinbachtold Jett, adding that the scrub falls in line with shuttle flightrestrictions.

"Weunderstand and we concur 100 percent," Jett replied. "That whole plan was givena lot of thought by a lot of smart people...it's the right thing to do."

NASA hasonly oneremaining day - Sept. 9 - to launch Atlantis' scrub-ridden mission to jumpstart ISS construction before settling into an extended delay to allow time fora Russian Soyuz mission to swap out station crewmembers. The next availablelaunch attempt can occur no earlier than late September or early October,shuttle officials have said.

Atlantis' STS-115mission will deliver a $371.8 million pair of newtrusses and solar arrays to the ISS. The spaceflight will mark NASA's thirdshuttle mission since the 2003Columbia accident and the first major ISSconstruction flight since late 2002.

Today'sscrub comes after a series of delays for Atlantis that culminated in thefailure of one of four liquid hydrogen fuel gauge sensors in the orbiter'sexternal tank.

Known as enginecutoff (ECO) sensors, the small detectors measure the amount of fuelremaining in a shuttle's external tank, and are designed as a backup system toshut down an orbiter's three main engines before propellant runs out.

ECO sensorNo. 3 inside the liquid hydrogen vessel at the bottom of Atlantis' 15-storyexternal tank failed a standard prelaunch check, in which launch controllers direct thefuel gauge to read 'dry' - indicating an empty tank - but the sensor continuedto read 'wet'.

Ifthe more than one ECO sensor reads wet when the fuel tank is actually dryduring launch, which would require a number of sequential failures, the enginescould ripapart and cause catastrophic damage. A false 'dry' reading when fuelactually remains could shut down Atlantis' engines prematurely before theshuttle reaches its intended orbit.

NASAflight rules typically call for four working sensors in both the liquid oxygenand liquid hydrogen fuel tanks, but the regulations do have an exception thatwould allow a Saturday launch. That approval hinges on the results ofadditional sensor checks as engineers drain Atlantis' external tank tonight andrefill it early Saturday.

Thatsame rationale allowed NASA's space shuttle Discovery to launchits STS-114 return to flightmission in July 2005 despite a 13-daydelay due to a similar ECO sensor problem. The sensors, all tracked to abatch manufactured in 1996, were later replaced with new versions in futureshuttle external tanks.

Malone saidthe external tank draining and refilling process will give shuttle engineers acritical look at the health of its ECO sensors.

Atlantishas suffered a series of inopportune delays from its initial Aug. 27 launchdate. The flight has been postponed due to a lightningstrike to the shuttle's launch pad, weather threats from a tropicaldepression and - on Wednesday - a powerglitch in a pump motor that helps cool one of the spacecraft's three vitalfuel cells. The fuel cell issue led shuttle officials to scruba Sept. 6 launch attempt, but was not in violation of any flightrules.

"It's anextremely complicated machine, the space shuttle," NASA astronaut Robert Satcher told SPACE.comThursday. "It takes a lot of people with expertise to make it work, and they doa very good job at it."