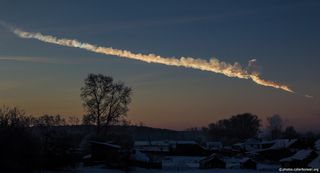 Trail of the asteroid that exploded over Chelyabinsk, Russia, on Feb. 15, 2013.
(Image: © Alex Alishevskikh CC BY-SA 2.0 via http://www.flickr.com/photos/alexeya/)

Two years after an asteroid exploded over Russia and injured more than 1,200 people, the origin of the space rock still puzzles scientists.

The 66-foot-wide (20 meters) asteroid broke up over the city of Chelyabinsk, Russia, on Feb. 15, 2013, shattering windows across the area and sending many people to the hospital with lacerations from the flying glass.

Originally, astronomers thought that the Chelyabinsk meteor came from a 1.24-mile-wide (2 kilometers) near-Earth asteroid called 1999 NC43. But a closer look at the asteroid's orbit and likely mineral composition, gained from spectroscopy, suggests few similarities between it and the Russian meteor. [Meteor Streaks Over Russia, Explodes (Photos)]

"These two bodies shared similar orbits around the sun, and initial studies suggested even similar compositions," lead study author Vishnu Reddy, a scientist with the nonprofit Planetary Science Institute in Tucson, Arizona, said in a statement.

However, "the composition of [the] Chelyabinsk meteorite that was recovered after the event is similar to a common type of meteorite called LL chondrites," he added. "The near-Earth asteroid has a composition that is distinctly different from this."

More generally, Reddy and his colleagues' work showed that it is difficult to make predictions about what particular asteroid could have shed pieces that slammed into Earth. Because most asteroids are so small and their orbits are "chaotic," it's hard to make a firm link, the authors said.

A paper based on the research appears in the journal Icarus.

The Russian meteor explosion has generated a great deal of interest in the search for potentially hazardous asteroids, sparking the creation of a new asteroid warning center at the European Space Agency, among other initiatives.

In a statement this week, the B612 Foundation, a nonprofit organization that seeks to reduce the threat from asteroids, urged agencies worldwide to step up their search for dangerous space rocks. The group plans to add to that effort with the asteroid-hunting Sentinel Space Telescope, which B612 hopes to launch in 2018.

"The fact of the matter is that asteroid impacts can be prevented using technology we can employ right now," B612 co-founder Ed Lu, a former space shuttle astronaut, said in a statement.

"And unlike other potentially global-scale catastrophic events, the solution is nearly purely a technical one, and with a relatively small and known cost," Lu added. "So as my friend, former Apollo 9 astronaut and co-founder of the B612 Foundation Rusty Schweickart says, 'Let’s get on with it.'"