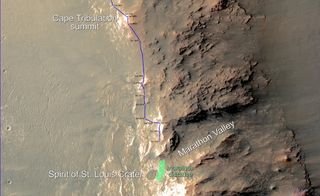 NASA's long-lived Opportunity Mars rover is about to run a marathon on the Red Planet.

Opportunity should surpass the milestone when it reaches its next destination along the western rim of the 14-mile-wide (22 km) Endeavour Crater. That destination, aptly named "Marathon Valley," appears to harbor several different types of clay minerals — a sign of long-ago exposure to neutral (rather than acidic) liquid water. [Opportunity's Latest Mars Photos]

"When Opportunity was in its prime mission 11 years ago, no one imagined this vehicle surviving a Martian winter, let alone completing a marathon on Mars," Opportunity project manager John Callas, of NASA's Jet Propulsion Laboratory in Pasadena, California, said in a statement.

"Now, that achievement is within reach as Opportunity approaches a strategic science destination," Callas added. "What's most important about the longevity and driving distance the mission keeps extending are not numerical thresholds, but the wealth of scientific information returned about Mars, made possible by these feats."

Opportunity holds the record for the longest distance driven on the surface of another world. Second place belongs to the former Soviet Union's Lunokhod 2 moon rover, which traveled 24.2 miles (39 km) in 1973.

Opportunity and its twin, Spirit, landed three weeks apart in 2004, and were tasked with searching for evidence of past water activity on Mars. The two golf-cart-size robots found plenty of such evidence, and then kept on exploring the Red Planet, far outlasting their original three-month-long prime missions.

Spirit stopped communicating with Earth in 2010 and was declared dead a year later. Opportunity remains active and has been exploring Endeavour's rim since August 2011.

But Opportunity is showing some signs of its advanced age. The rover's robotic arm has been arthritic for quite some time now, and recently, Opportunity began experiencing problems with its flash memory, which can store data when the power is off.

Therefore, the Opportunity team has been beaming the six-wheeled robot's data back to Earth every day (via NASA's Mars Odyssey and Mars Reconnaissance Orbiter spacecraft) before the rover powers down for the night. They plan to upload new software in the next few weeks, in an attempt to fix the flash-memory issue.

However, funding issues, rather than health problems, may ultimately bring the rover to a halt: The White House's proposed budget for fiscal year 2016, which was released last week, allocates no money to Opportunity's mission.

That's not a death sentence for the rover, however. NASA officials said they'll review the mission in the future and evaluate whether funding should be sourced to keep Opportunity going. (That's just what happened last year, in fact; the rover was also shut out of the White House's 2015 budget request.)

It costs about $14 million per year to operate Opportunity.