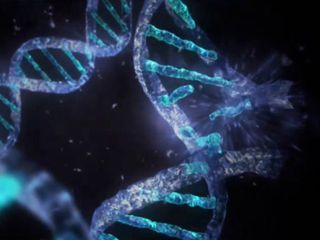 Space radiation breaks apart DNA in this artist's conception. Scientists are interested in how information flows between DNA, RNA and proteins.
(Image: © NASA)

Life's origins are a mystery, but every year scientists get a little bit closer to understanding what made life possible on Earth, and possibly on other planets or moons.

We only have one known case study of life so far, on our own planet, but microbial life is considered possible in many other areas around the solar system, such as on Mars, Jupiter's icy moon Europa, and on Enceladus, a moon of Saturn that hosts water-ice-spewing geysers.

While some researchers examine the environmental conditions that lead to life, others are more interested in the evolution of simple cells into more complex ones. One large wish of scientists these days is to create artificial cells that closely mimic what biological ones do so that it would be easy to create laboratory conditions to test out how they evolve. [7 Theories on the Origin of Life]

One recent line of research involves protocells, which are a very early form of the cells that are common on Earth today. They don't have a nucleus, or most other elements of the modern eukaryotic cell, but they do contain lipids, which are molecules such as vitamins and fats. In biology, one function of lipids is to help form membranes that hold a cell together.

Researchers would love to create an artificial protocell, but that's far from easy. Figuring out how inheritance works — how traits of a parent protocell are passed on to the next generation — is one of the largest problems facing scientists today.

A new line of research examined how to create "information string polymers,"  the instructions that tell cells how to divide and underlie their metabolism. The paper, called "Structure and selection in an autocatalytic binary polymer model," was published in July 2014 in the journal Europhysics Letters.

Harold Fellermann, a co-author of the paper, was with the Center for Fundamental Living Technology at the University of Denmark when he began the research, and is now with Newcastle University as a senior research associate of computer science. He works closely with the biology department on advancing nanotechnology and synthetic biology.

"I'm very interested in the creative potential of nature," he said. "Nature in general seems to be fertile with creativity that outperforms any human imagination. We find solutions to problems in nature that no engineer would envision."

One example, Fellermann said, has to do with the information encoding that passes from a cell to its descendants. Today, we are most familiar with DNA and another nucleic acid called RNA that pass molecular information though the generations.

Back when scientists first were studying these processes, they believed that information only flows from DNA to RNA into proteins. More examination, however, showed that the information can go in more than one direction. Sometimes RNAs can be written back into DNAs, for example. Or a DNA strand can be reoriented by a protein, thereby changing the genetic program on the fly.

The complexity of inheritance was part of the difficulty that Fellermann and the team, including lead author Shinpei Tanaka of Hiroshima University, faced as they attempted to simulate information polymers in a computer simulation. Additionally, the researchers had two more problems to face down.

Information polymers are molecules, which themselves are broken apart in water, a fundamental part of life as we know it. How to keep that string together without it dissolving was one question the researchers faced. [Code of Life: Photos of DNA Structures]

Another issue was replication. Cells today create copies of themselves using enzymes, which are the proteins that underpin complex reactions. (Another example of a complex reaction would be food digestion.) Protocells, the researchers suggested, could have used a process called ligation, which connects shorter molecular strings into longer ones, along with matching longer strings.

The researchers brought in a hypothesis from three decades ago that assumed that any sequence of polymers (chain of small molecules) can encode information, and can be copied from one polymer strand to another using a process called template directed replication.

This type of ligation could have occurred without the help of any enzymes.

"We basically went back to what Stuart Kauffman and other scientists wrote about in the 1980s, but assuming we don't have random interactions among our molecules," Fellermann said of replication. "We have certain templates that can replicate themselves by taking two complementary subsequences and then use a chemical reaction to bond the replication product."

When simulating information strings in the computer simulation, the researchers came up with a surprising discovery. Replication occurred as expected, with information strings duplicating themselves, but the scientists were surprised to see shorter and longer strings being created in strikingly regular patterns.

Since the researchers had not put the pattern into the program themselves, they concluded that the strings had to be creating the pattern themselves through their interactions. In other words, the strings created a network of molecules (called an autocatalytic network) whereby each molecule assists other ones with chemical reactions. It's considered an early form of metabolism, which refers to the chemical processes required for life to occur. [Genetics by the Numbers: 10 Tantalizing Tales]

"What happens is you have almost a molecular ecology," Fellermann said. "Every species and strand, they service each other's reactants and products and catalysts."

Over time, the simulation showed the information strings were occurring in equal proportions of long and short lengths in predictable patterns. While the scientists can't say for sure that this was a step along the road to life, they said it bears further investigation as they work to create artificial protocells.

The researchers checked carefully to make sure their computer simulations weren't at fault, running up to 5,000 simulations a week and also double-checking their work with a completely different system and thorough mathematical analysis.

These fundamental processes are not dependent on which environment the protocell was in, Fellermann said. In a larger sense, this means that the protocells could be transmitting information in the same way, whether they are embedded in an acidic environment, trying to survive in a hot spring underwater or in any variety of other environments. This suggests the same process could work in extraterrestrial environments.

The next stage for the researchers will be to look at higher-order activity, Fellermann said, focusing on activity associated with RNA, a single-stranded nucleic acid.

The researchers will look at secondary structures —  fundamental biological structures of biopolymers, such as nucleic acids and proteins — to better understand how RNA's role works.

The research not only has promise for understanding life, but also for creating more intelligent computers. The team speculates that their work could eventually underlie technological advances, such as self-repairing computers.

These biological-type machines could be useful in space exploration, such as in robotic colonies on the moon, or assisting scientists in a future Mars landing party. With the ability to do repairs without the extra materials required from Earth, long-term space exploration could be made cheaper — as long as the technology is there to support it.