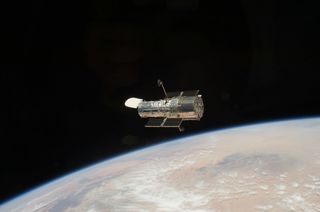 The Hubble Space Telescope is an icon in space that has peered deep into the universe for 25 years. In May 2009, astronauts on NASA's space shuttle Atlantis captured this farewell photo of Hubble near the end of the final servicing mission to the telescope.
(Image: © NASA)

Scientists working with the long-lived Hubble Space Telescope say that the intrepid eye on the sky could continue functioning through 2020, and even beyond.

Hubble is currently in good shape. The instruments repaired during the last Hubble servicing mission in 2009 have operated longer since the repairs than they did with the original hardware, Kenneth Sembach of the Space Telescope Science Institute said during a news conference in January at the 225th meeting of the American Astronomical Society.

Many of the other systems on Hubble are functioning well, even with the telescope reaching its 25th year in space in 2015. NASA did a study in 2013 evaluating Hubble's engineering and subsystems that ultimately showed a good likelihood that the telescope would continue functioning at least until 2020, Sembach said. [See amazing images taken by Hubble]

Operating the telescope through 2020 is an important goal for NASA. Hubble's successor — NASA's James Webb Space Telescope (JWST) — should launch in 2018, creating a one-two punch of space telescope observations for at least a couple years before Hubble's mission ends.

And officials are doing all they can to be sure that the spacecraft keeps working through at least that target date.

"We're conducting what we're calling the '2020 vision' for Hubble, and that is to make sure that the observatory is ready to run for at least five or six years to get at least a year of overlap with James Webb, if not more," Sembach said. "We're lucky in that we have very proactive engineering that's been going on over the last few years and continues to go on both at the [Space Telescope Science] Institute and at [NASA's] Goddard [Space Flight Center] to make sure that we're operating the observatory as safely and as effectively as we can. So, we're going to get to 2020."

JWST and Hubble are designed to observe somewhat different cosmic spectacles. JWST will extend Hubble's reach into the early universe, allowing scientists to potentially learn more about how the earliest galaxies formed.

If the two telescopes do function simultaneously, scientists might be able to observe one target using both observatories, giving researchers a more detailed spectrum of science from the cosmic target.