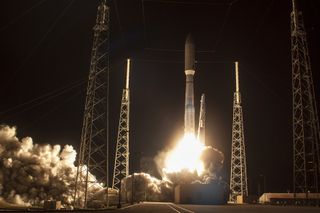 A huge satellite blasted off Tuesday night (Jan. 20) in a dazzling launch for a mission to help improve the U.S. military's tactical communications capabilities.

As its name suggests, the 7.5-ton (6,800 kilograms) MUOS-3 is the third Mobile User Objective System spacecraft to reach orbit. MUOS-1 and MUOS-2 launched in February 2012 and July 2013, respectively, also atop Atlas V rockets. The satellite was built for the U.S. military by Lockheed Martin. The United Launch Alliance, a joint project by Lockheed and Boeing, provided the Atlas V.

The five-satellite MUOS constellation will be complete after two additional launches, one likely coming later this year and another in 2016, Navy officials said. Four spacecraft are core elements, while the fifth is considered an obiting spare.

"This MUOS-3 launch is another major milestone to achieving the next generation of global tactical satellite communications capability for the Department of Defense," Navy Capt. Joe Kan, MUOS program manager said in a statement.

The MUOS constellation is designed to work like a cellphone network in space. It should provide a big upgrade in secure, high-speed communications for U.S. troops on the move around the world, Navy officials said.

The MUOS system, which also includes four ground stations, will ultimately replace the military's Ultra High Frequency Follow-On network. When it's up and running, MUOS should provide 16 times the communications capacity of the old system, said Lockheed Martin representatives.

"Right now we need to ensure the system works end-to-end," MUOS technical director Jim Parsons said in the Navy statement. "We're in the process of doing that by connecting an Army radio program, an Army waveform development program, our Navy satellites and ground system and DoD teleports to ensure that all elements work together as designed."

Tuesday's liftoff was United Launch Alliance's first of 2015, as well as the 200th ever to use the Atlas-Centaur system, which consists of an Atlas booster and a Centaur upper stage.