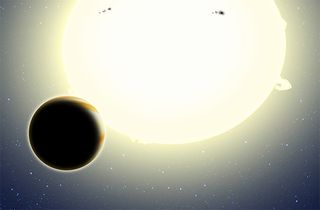 Artist's concept of the first planet discovered by NASA's Kepler spacecraft during its K2 mission, a "super Earth" called HIP 116454b.
(Image: © David A. Aguilar (CfA))

SETI has pointed a powerful radio telescope array at the Kepler Space Telescope's most recent exoplanetary discovery in the hope of detecting an artificially-generated radio signal. Alas, the world is not transmitting, and probably isn't home to an extraterrestrial intelligence.

SETI, which stands for the Search for Extraterrestrial Intelligence, utilized the Allen Telescope Array (ATA), located in at Hat Creek Radio Observatory, 290 miles northeast of San Francisco, Calif., to study HIP 116454b, an exoplanet 180 light-years away in the constellation Pisces. The exoplanet, that measures 2.5 times the diameter of Earth (and is therefore defined as a ‘super-Earth’), was the first discovery made by Kepler in its rebooted "K2" mission.

During its primary mission, the Kepler suffered the breakdown of its second reaction wheel in May 2013. The loss of stability forced Kepler into an early retirement. Fortunately, NASA engineers were able to think up an ingenious new mission profile that requires only two of the four reaction wheels to be operational. And in December, K2's first exoplanet discovery was announced: HIP 116454b. [7 Ways to Find Alien Planets]

HIP 116454b isn't, however, what we would consider to be 'habitable' in any way. The super-Earth has a rapid 9-day orbit around its host star and is therefore expected to be a roasted world, probably tidally locked (i.e. with one hemisphere of the exoplanet constantly facing its star).

Why would SETI bother aiming the ATA at this unlikely target, searching for radio signals from a hypothetical alien civilization?

"…as centuries of experience have shown, observation sometimes trumps expectation, and that is why new exoplanets — whether they seem promising for life or not — are routinely observed by the SETI Institute with the Allen Telescope Array," writes SETI Institute Senior Astronomer and Director Seth Shostak.

In other words, just because we deem a planet too harsh for "life as we know it" to evolve, science has this wonderful habit for turning up results we didn’t expect — so why not listen in on HIP 116454b?

Historically, SETI has listened focused distant stars in the hope of detecting narrow-band radio signals from technologically-advanced extraterrestrials. The logic is that humanity is constantly leaking radio signals into space, and we consider ourselves to be at least technologically proficient, so if we can detect similar signals from another star system, perhaps there’s another civilization out there at a similar state of technological can-do as us.

But before the age of exoplanetary discoveries, SETI was uncertain whether the stars they were eavesdropping in on even hosted planets. But now, especially since the launch of Kepler in 2009, there are an abundance of stellar targets that are known to host exoplanets — many of which orbit in the habitable zones of their stars. Therefore, following up on these Kepler discoveries with the ATA has ushered in a new era of "directed SETI."

So far, the ATA has been looking for signals in the 1000-2250 MHz range emanating from HIP 116454b and Shostak reports that higher frequencies will also be analyzed. It seems that directed SETI will leave no exoplanetary stone unturned in its epic and sustained mission to seek out intelligent extraterrestrial life in our galaxy.