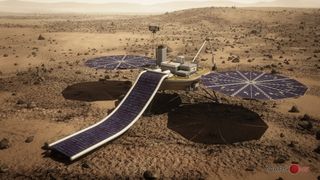 Artist's concept of Mars One's robotic lander, which the nonprofit group intends to launch toward the Red Planet in 2018.
(Image: © Bryan Versteeg/Mars One Foundation)

Lifeforms from Earth may touch down on Mars just a few years from now — but those interplanetary travelers would be plants, not people.

A tiny, self-contained greenhouse has been selected to fly on the robotic lander that Red Planet colonization effort Mars One intends to launch in 2018, group representatives announced Monday (Jan. 5).

The greenhouse experiment, known as Seed, was one of 35 proposed lander science payloads submitted by university groups around the world. Mars One whittled this original pool down to 10 finalists, and Seed was chosen by a monthlong public vote that closed on Dec. 31. [Mars One's Red Planet Colony Project (Gallery)]

"We are really pleased to be the selected project among so many excellent ideas," Seed team member Teresa Araújo said in a statement. "We are thrilled to be the first to send life to Mars. This will be a great journey that we hope to share with you all."

The payload will send seeds of the small flowering plant Arabidopsis thaliana, an organism commonly used in space-science experiments, to Mars inside two containers. (The outer one will serve a protective function.) Upon landing, the seeds will be exposed to heat and a growth medium, giving them the chance to germinate and grow. Images relayed to Earth will let team members — who are based at several universities in Portugal and Spain — know how the experiment is going.

Seed is designed to advance researchers' understanding of the potential for plant growth on Mars, which could aid the development of life-support systems on the Red Planet, experiment leaders said.

Although Seed won the competition, it has not yet locked down its spot on the 2018 mission. Mars One will first examine the proposal, to make sure it is feasible and can be integrated on the lander, group representatives said. If this analysis reveals any serious issues, Mars One may end up going with one of the contest runners-up. (You can read more about all 10 finalists here; the second- and third-place finishers are Cyano Knights and Lettuce on Mars.)

Mars One aims to land four astronauts on the Red Planet in 2025, kickstarting a permanent colony that will be augmented with new arrivals every two years thereafter. There are no plans at the moment to bring any of the settlers back to Earth.

To help prepare for colonization, Mars One — a nonprofit based in the Netherlands — plans to launch a number of robotic precursor missions, including the 2018 effort, which would send a communications orbiter and lander to Mars.

Mars One intends to pay for its ambitious activities primarily by staging a global media event around the colonization process, from astronaut selection through the pioneers' time on the Red Planet.