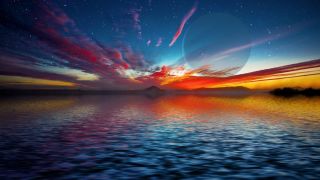 This artist’s depiction shows a gas giant planet rising over the horizon of an alien waterworld. New research shows that oceans on super-Earths, once established, can last for billions of years.
(Image: © David A. Aguilar (CfA))

Scientists have used computer modeling to show that so-called "super-Earth" planets — worlds that are up to five times more massive than Earth — can play host to long-lived oceans. The modeling shows that the oceans can potentially remain on the planet for billions of years, possibly allowing life to develop on the alien planet. Researchers presented the new super-Earth findings during a news conference at the 225th meeting of the American Astronomical Society here in Seattle.

"When people consider whether a planet is in the habitable zone, they think about its distance from the star and its temperature," lead author of the super-Earth study Laura Schaefer of the Harvard-Smithsonian Center for Astrophysics (CfA) in Cambridge, Massachusetts said in a statement. "However, they should also think about oceans, and look at super-Earths to find a good sailing or surfing destination." [10 Exoplanets That Could Host Alien Life]

Scientists think that Earth's oceans have existed for almost the entire history of the planet, and water is key to life as humanity understands it. Therefore, finding other worlds with long-lived oceans could help scientists narrow down planets that might have a good chance of hosting life.

Earth's oceans are recycled. Water from the planet's oceans is pulled into the mantle from the crust due to geological activity, but water is also released from the mantle and back into the surface oceans through volcanic activity. The new computer model produced by Schaefer and her team was designed to test if this water recycling can occur on super-Earths with plate tectonics as well, according to the CfA.

In fact, some planets larger than Earth could be even better at maintaining oceans than this planet. Schaefer's model shows that a planet two to four times the mass of Earth could host oceans continuously for 10 billion years. The largest planet in the study, which was about five times more massive than Earth, didn't develop an ocean in the computer model for about 1 billion years, but those planets' oceans, once formed, continue to persist on the surface for a long amount of time. .

Schaefer and her team suggest that it might be better to hunt for life on older super-Earths. Researchers might have a better chance of finding complex life on planets that are 1 billion years older than Earth, the team said.