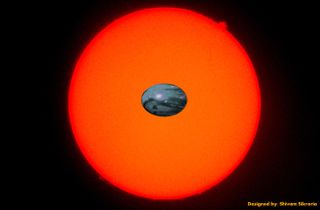 Artist’s concept of a stretched-out rocky planet closely orbiting a red dwarf star. There is a difference in the strength of the gravitational field on each side of the planet so close to the star, stretching the world significantly.
(Image: © Shivam Sikroria)

As scientists ramp up the search for Earth-size planets outside our solar system, one team says it's possible that "stretched-out" rocky exoplanets could be found orbiting close to their parent stars.

These exoplanets would be extremely hot, bent out of shape by the gravitational pull of their parent stars and likely inhospitable to life. But studying these worlds could shed light on the internal structure of rocky planets, researchers said.

"Imagine taking a planet like the Earth or Mars, placing it near a cool red star and stretching it out," study lead author Prabal Saxena, an astrophysicist at George Mason University, said in a statement. "Analyzing the new shape alone will tell us a lot about the otherwise impossible to see internal structure of the planet and how it changes over time."

Scientists are already familiar with gas giants that orbit close to their parent stars; many such "hot Jupiters" have been discovered to date. Such worlds tend to have high temperatures (more than 1,832 degrees Fahrenheit, or 1,000 degrees Celsius) and experience extreme tidal forces from the star's gravity.

Prabal's team created a model in which rocky planets are similarly close to red dwarf stars, the most common type of star in the galaxy.  Because red dwarfs are dimmer than the sun, it can be easier to find planets crossing across their faces and blocking their light — a search strategy known as the transit method.

The model revealed that close-orbiting rocky planets should be tidally locked to their star so that one side always faces its stellar companion, just as the near side of the moon always faces Earth. The star's gravity should also stretch out the core of the planet, making it easier to spot a transit because of the world's unusual shape.

Signals could be detectable by currently operating telescopes, the team added, with a higher probability of success coming from newer telescopes in production. These include NASA's $8.8 billion James Webb Space Telescope, set to launch in 2018, and the ground-based European Extremely Large Telescope (E-ELT), which is expected to start observing the heavens in the mid-2020s.

The study was published online this month in the journal Monthly Notices of the Royal Astronomical Society.