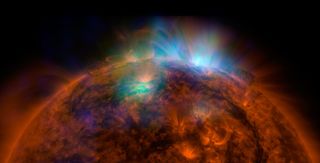 The first image of the sun captured by NASA's Nuclear Spectroscopic Telescope Array (NuSTAR), which is sensitive to high-energy X-ray light. X-rays seen by NuSTAR show up as green and blue in the photo, which is overlaid on an image taken by NASA's Solar Dynamics Observatory.
(Image: © NASA/JPL-Caltech/GSFC)

A NASA space telescope designed to peer at faraway black holes has snapped a stunning image of the sun, showing that its sensitive X-ray eyes can investigate mysteries in Earth's own neighborhood.

The new image, which was taken by NASA's NuSTAR spacecraft (short for Nuclear Spectroscopic Telescope Array), is the best-ever view of the sun in high-energy X-ray light, space agency officials said. The photo, and others taken by NuSTAR in the future, should help researchers learn more about our star, they added.

"NuSTAR will give us a unique look at the sun, from the deepest to the highest parts of its atmosphere," NuSTAR team member David Smith, of the University of California, Santa Cruz, said in a statement. [Images: NuSTAR, NASA's Black Hole Space Telescope]

The new image, which was released Monday (Dec. 22), overlays NuSTAR observations (seen in blue and green) onto an image of the sun captured by NASA's Solar Dynamics Observatory spacecraft.

NuSTAR launched in June 2012, primarily to study black holes and other distant sources of X-ray light. But solar scientists had suggested using the spacecraft to look at the sun several years before it got off the ground. (While the sun is too bright for most telescopes to view in visible light, its output of high-energy X-rays isn't intense enough to damage NuSTAR's detectors, researchers said.)

"At first, I thought the whole idea was crazy," NuSTAR principal investigator Fiona Harrison, of the California Institute of Technology in Pasadena, said in the same statement.. "Why would we have the most sensitive high-energy X-ray telescope ever built, designed to peer deep into the universe, look at something in our own backyard?"

Harrison eventually warmed to the idea, NASA officials said, after realizing that NuSTAR might help solve some long-standing solar mysteries, such as the "coronal heating problem."

One possible explanation is that "nanoflares" are helping to drive up coronal temperatures (along with the much larger, and easily observed, standard flares). NuSTAR may be the only instrument capable of detecting these hypothesized faint phenomena, NASA officials said.

"NuSTAR will be exquisitely sensitive to the faintest X-ray activity happening in the solar atmosphere, and that includes possible nanoflares," Smith said. The spacecraft's sun images will only get better over the next few years, as solar activity decreases, he added. (The sun is currently near the peak of its current 11-year activity cycle, known as Solar Cycle 24.)

NuSTAR solar observations might also reveal more about the nature of dark matter, the mysterious stuff thought to make up most of the material universe.

Dark matter apparently does not emit or absorb light — hence its name — and nobody knows for sure what it's made of. A number of exotic particles have been proposed as dark matter constituents, including weakly interacting massive particles, sterile neutrinos and axions.

If axions exist, NuSTAR may see signs of them — patches of X-rays in the center of the sun — NASA officials said.