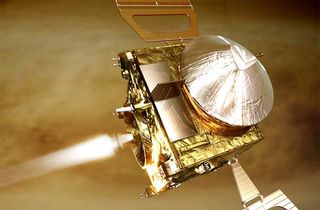 After more than eight and a half years in orbit around our cloud-shrouded neighboring world, ESA's Venus Express is about to go gentle into that good night (that is, if by "gentle" you mean death-diving into the corrosive, sulfuric acid-laden atmosphere of an intensely overheated planet.)

Earlier this year, after its science observations had officially concluded, ESA had Venus Express perform a series of aerobraking maneuvers that sent the hardy spacecraft skimming through the upper layers of Venus’ atmosphere, gathering a slew of intriguing data as it went.

Already "running on fumes" as its fuel reserves dwindled, Venus Express' most recent attempts at maintaining its altitude during the last week of November fell short and full contact was lost on Nov. 28. [Photos from Venus Express]

"The available information provides evidence of the spacecraft losing attitude control most likely due to thrust problems during the raising maneuvers," according to Patrick Martin, ESA's Venus Express mission manager, in a press release issued on Dec. 16. “It seems likely, therefore, that Venus Express exhausted its remaining propellant about halfway through the planned maneuvers last month.”

Although some contact has since been re-established the communication is incomplete and unstable, and there is no longer any way for the spacecraft to further increase its altitude.

Over the next several weeks Venus Express' orbit will steadily degrade as it ultimately sinks into Venus' atmosphere.

"It has been an exciting experience to operate this marvellous spacecraft in the Venus environment. The scientific success of the mission is a great reward for the work done by the operations teams and makes us more proud than sad in this moment of farewell." — Paolo Ferri, Head of ESA Mission Operations

Although Venus Express will soon be gone, mission scientists and engineers are very pleased with the achievements of the mission and the success of the spacecraft, which has performed exceedingly well since its launch in 2005 during its main and extended science missions.

"While we are sad that this mission is ended, we are nevertheless happy to reflect on the great success of Venus Express as part of ESA's planetary science program and are confident that its data will remain important legacy for quite some time to come," said Martin Kessler, Head of ESA Science Operations.

"The mission has continued for much longer than its planned lifetime and it will now soon go out in a blaze of glory."