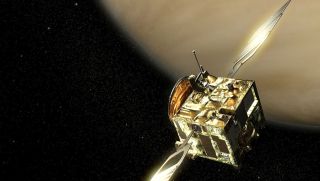 Artist's concept of Europe's Venus Express spacecraft, which has been studying Venus from orbit since 2006.
(Image: © ESA (Image by AOES Medialab))

The end may be near for Europe's venerable Venus probe.

On Nov. 28, mission controllers lost contact with the European Space Agency's (ESA) Venus Express spacecraft, which has been circling Earth's hellishly hot "sister planet" for more than eight years. Over the past few days, the team was able to re-establish limited contact and also downlink some data, confirming that Venus Express' solar arrays are pointed at the sun as desired, mission officials said.

The reasons for the communications blackout remain unclear at the moment, but one possibility is that the probe has finally run out of fuel. [The 10 Weirdest Facts About Venus]

"It is possible that the remaining fuel on board VEX was exhausted during the recent periapsis-raising maneuvers … and that the spacecraft is no longer in a stable attitude (the spacecraft’s high-gain antenna must be kept pointed toward Earth to ensure reliable radio contact)," ESA officials wrote in a blog post Friday (Dec. 5. ).

Those maneuvers began on Nov. 23 and were intended to raise Venus Express' orbit, which was lowered during a dramatic "aerobraking" campaign this past summer.

The aerobraking moves took Venus Express deep into Venus' thick atmosphere, often getting the probe within 81 to 84 miles (131 to 135 kilometers) of the planet's surface. The goals were twofold, mission officials said — to sample regions of the Venusian atmosphere that weren't well known, and to test out aerobraking for use on future missions as a trajectory- and orbit-altering strategy.

Venus Express arrived in orbit around Venus in April 2006, with plans calling for a two-year primary mission life and then perhaps two more years of extended operations. The probe has outlasted expectations significantly, but it cannot keep going forever; sooner or later, its fuel will run out, and Venus Express will make one final dive into the Venusian atmosphere.

The continuing investigation into the Nov. 28 communications blackout may reveal the answer.

"The operations team is currently attempting to downlink the table of critical events that is stored in protected memory on board, which may give details of the sequence of events which occurred over the past few days," ESA officials wrote in the Friday blog post. "The root cause of the anomaly (fuel situation or otherwise) remains to be established. We will provide an update as soon as something more concrete is known."