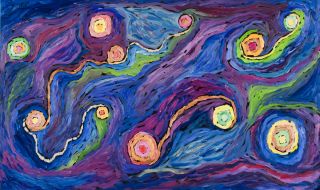 "Diophantine Flow" (2010) is one of scientist Edward Belbruno's works that reflects back to a pastel work he did in 1986 that helped him come up with a new way for spacecraft to slow down in space without using fuel.
(Image: © Edward Belbruno)

NEW YORK — As a scientist, Edward Belbruno has spent a career dreaming up trajectories across the solar system that allow spacecraft to buzz close by planets and change speed without using fuel. But Belbruno is also a prolific painter, and the genesis of his spacecraft trajectory concept originated in that art.

Belbruno's cosmic paintings are currently on display at the New York Institute of Technology (NYIT) Gallery 61 in New York City. Many of the works are inspired by, or are inspiration for, Belbruno's professional work in cosmology, spaceflight science and mathematics.

One of the Belbruno's paintings, titled "When I Was 7," features a small spacecraft with landing legs deployed, floating against a red sky. It's one of the first paintings Belbruno ever did (at age 7), and it seems somewhat prophetic, considering that the combination of art and science has, in many ways, defined the rest of Belbruno's life.

Edward Belbruno earned a Ph.D. in mathematics from New York University's Courant Institute of Mathematical Sciences, later worked at NASA's Jet Propulsion Laboratory (JPL) in California on orbital trajectories for the Galileo mission to Jupiter, and is now director of the research company Innovative Orbital Design. His artwork has been exhibited in galleries in the United States and Europe. In 1999, Belbruno had a piece commissioned by the director of NASA for that organization's executive collection.

Belbruno said his artistic and scientific impulses are separate, but they can influence each other.

"The artistic self is manic-depressive," Belbruno told Space.com at the opening of the NYIT gallery. "Moods fluctuate — very passionate, up and down. The science self is controlled. So, emotionally they're very different. When you're in the zone, artistically, it just opens up everything in the science world […] And when I stop doing the paintings, the scientific work comes to a screeching halt." [Alien Life, Landscapes and the Art of Space (Gallery)]

"The one I did at [age] 7 — that's space art," he said. "Space art is real space things. This is cosmic-oriented, but it's abstract expressionism," he said, referring to his painting "Diophantine Flow."Belbruno emphasized, however, that his paintings are not "space art."

Belbruno said that, while working at JPL, a pastel picture he was working on unexpectedly gave him the solution to a problem he'd been puzzling over: How could a space vehicle or probe use the gravity of nearby bodies (like the moon) to slow down? Belbruno came up with a method that involved chaos dynamics, and was used to salvage the Japanese lunar spacecraft Hiten.

The NYIT exhibit includes works by Belbruno from a period between 2009 and 2014 that he said are reflections on the pastel work that inspired the scientific breakthrough. These works are full of bright colors, and feature squiggly lines that connect to circles — a reference to the chaotic paths of space probes traveling between planets and other cosmic bodies.

"I'm a space geek, and I love it," Belbruno said. "So if I were to do art all the time, I'd be like, 'There's got to be more to life than this. To me, [space] just represents absolute mystery and hope — hope for the future — and excitement."

Belbruno said that, rather than detracting from his artistic dreams, his science career has shaped his style and made him the artist that he is today.