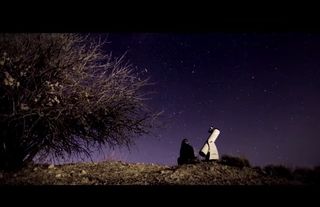 The documentary follows a young Iranian woman and her dream to become an astronaut.
(Image: © YouTube)

NEW YORK – Lugging a huge telescope to a half-finished observatory in the middle of nowhere to gaze at the stars in the wee hours is not considered an appropriate activity for a young woman in conservative Muslim culture.

But an Iranian woman named Sepideh Hooshyar is doing just that, and a documentary released earlier this year provides a window into her five-year struggle to keep her dream of becoming an astronaut alive.

The documentary, called "Sepideh: Reaching for the Stars," debuted at the Sundance Film Festival in Utah earlier this year and was part of the Imagine Science Film Festival's closing night here at the American Museum of Natural History on Oct. 24. [Iran in Space: Rockets, Satellites & Monkeys (Photos)]

In the film, Hooshyar often recites passages from her diary. Each entry begins with "Dear Einstein," an homage to the famous scientist whose portrait hangs on her bedroom wall.

The young woman's idol is Iranian-American Anousheh Ansari, the world's first female space tourist and the first person of Iranian descent in space.

Hooshyar lives in Sa'adt Shahr, a small town in central Iran where young women are not encouraged to pursue scientific hobbies. So her stargazing hobby and late-night excursions to the observatory inspire nasty rumors about Hooshyar and her family.

She faces constant challenges from her mother and uncle. In one emotionally charged scene in the documentary, her uncle threatens to kill her if she continues to go out at night with her telescope.

Hooshyar doesn't buckle under this threat, but another obstacle rears its head: Hooshyar's mother breaks the news that the family cannot afford to send her to college. Hooshyar applies for a scholarship but is unsuccessful. In the documentary, viewers get the sense that she loses out on the scholarship because she is a woman.

However, Hooshyar finds a way to write to her idol Ansari. Ansari responds by calling Hooshyar one day, and the emotional conversation — which is caught on camera — renews Hooshyar's resolve to pursue astronomy.

The documentary, directed by Berit Madsden, follows Hooshyar for five years. The film reveals other problems impeding scientific achievement in Iran, like the lack of funding for an observatory that's been half-finished for 20 years and the government's unwillingness to provide bigger and better telescopes for students.

But, during a panel discussion after the screening, Madsden said she hopes the documentary will show a different and more positive picture of Iran. Madsden said one major theme in the documentary is that humanity's curiosity about the cosmos is universal, and even those who are discouraged from learning about the universe will still seek out knowledge.

Today, Hooshyar is studying physics at a small university and is still very serious about becoming an astronaut.