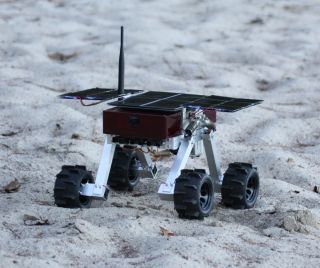 A prototype of the Canadian Beaver rover that could arrive at Mars in 2018.
(Image: © Thoth Technology)

A Canadian company wants to land a couple of robots on Mars in late 2018, but to do so, it might need your help.

For the mission, called Northern Light, Thoth Technology plans to deliver a lander and a mini rover called "Beaver" to the Red Planet in the next four years, and the company is asking space fans to help crowdfund the huge undertaking.

The Northern Light mission will look for biomarker gases (those that could indicate biological sources) like methane, and will have the capability to grind into rocks, to find out the environment in which they were formed. No landing site has been selected yet, but it will likely be close to the equator for maximum sunshine. [The Search for Life on Mars: Photo Timeline]

A key challenge, however, will be obtaining sufficient funding. The full cost of the mission has not been disclosed publicly, but development costs are expected to add up to $980,000, Roberts said. An Indiegogo campaign has raised roughly C$6,000 ($5,320) of that, and will close Jan. 3.

Caroline Roberts, president and CEO of Thoth Technology, said she prefers not to speculate on what will happen — or what other funding avenues would be pursued — if the crowdfunding campaign doesn't raise its goal of $1 million CAD.

“We're hoping it will be successful," Roberts told Space.com. "We carry on, regardless of the level of hope. We're not stopping."

More money will be needed to buy a ride on a rocket and to operate the mission from the Algonquin Radio Observatory, a Canadian telescope owned by Thoth that would serve as the link between Mars and Earth.

The lander, rover, instrument package and entry system will weigh about 75 kilograms (165 lbs.). This makes it about 30 percent of the weight of NASA's Sojourner/Pathfinder mission — the first roving exploration of the Red Planet — that landed on Mars in 1997.

But the 13-lb. (6 kg) Beaver will be much smarter than the larger Pathfinder rover, working almost fully autonomously during its planned 90-day mission on the surface. This is different from how the much larger Curiosity and Opportunity rovers operate, which both require frequent guidance from NASA.

The mini rover will be equipped with sensors to provide information on holes and obstacles, and will feed that data to an algorithm that uses probability to figure out where the rover should go next. Beaver will assess the need to avoid obstacles in accordance with science objectives for the mission.

"At each decision point, the rover determines whether to drive forward, [or to] turn right or left slowly or quickly," said Ben Quine, an engineering professor at York University in Toronto and principal investigator for the Northern Light mission.

"With only one ground station, we will only have an 8-hour contact period per day for tele-operation, but we want the rover to be exploring the environment whenever it has the solar power available for motion," Quine told Space.com via email.

Beaver principal investigator Mark Post, of the University of Strathclyde in the United Kingdom, has said that with this approach, the rover will be able to roam up to 0.6 miles (1 kilometer) from the landing site. If the rover was waiting for commands, officials said, it couldn't go nearly that far.

Although Beaver isn't as robust or capable as the roving Curiosity laboratory on the Red Planet, the mission is more about making Mars accessible, Roberts said. Only a handful of missions have landed on the Red Planet, she said, and miniature missions could explore the planet more quickly.

The mission is also using technology that has flown on past missions. A notable example is an Argus infrared spectrometer, which will measure atmospheric gases. Similar spectrometers have flown in space already on the Canadian Advanced Nanospace eXperiment (CanX)-2 nanosatellite and India's SRMSat nanosatellite, both to measure greenhouse gases on Earth. A third spectrometer is expected to launch on a satellite built by Sathyabama University in India.

Indiegogo supporters can weigh in on three options for landing sites. Wherever it goes, Northern Light will make its way to the surface under a drogue parachute. Just before landing, airbags will deploy and absorb the shock laterally, thus avoiding the bouncing that was needed for NASA's Spirit and Opportunity landings in 2004.

"Every time the system bounces, you risk damage and falling into a hole," Roberts said, adding that the lander would then automatically deploy, and the rover would drive onto the surface.

The mission has also attracted the attention of Canadian celebrities. Barenaked Ladies singer Ed Robertson, who performed with Canadian astronaut Chris Hadfield during the latter's last mission in 2012 to 2013, recently recorded a promotional video touting the benefits of Beaver.