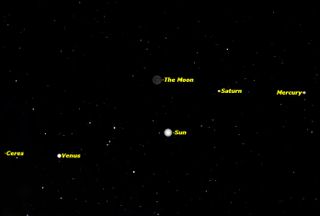 On Saturday morning, Nov. 22, there will be a spectacular gathering of the sun, the moon, three planets and a dwarf planet, all within a 20-degree span of sky. Unfortunately, most observers on Earth will be able to see it.
(Image: © Starry Night software)

The morning sky will play host to a spectacular gathering of solar system objects grouped closely together tomorrow (Nov. 22), but it won't be easy for observers on Earth to see it.

The sun, moon, three planets and the dwarf planet Ceres will all appear within a 20-degree span of sky. (For reference, your clenched fist held up to the sky measures about 10 degrees across.) Mercury and Saturn will be just west of the sun and new moon, while Venus and Ceres will be to the east. Unfortunately, the bright sun will wash out the beautiful "conjunction," but interested observers can still use a planetarium software program like Starry Night to check out the stunning event.

Because the moon and three of the five naked-eye planets are gathered close to the sun, there is currently a remarkable absence of bright planets in the night sky. Mars is getting close to the sun, and sets around 8 p.m., and Jupiter is in the morning sky, rising around 11 p.m. [Best Night Sky Events of November 2014]

Conjunctions (groupings of astronomical objects from Earth's perspective) between two astronomical bodies occur all the time. The sun, moon and planets all move in orbits close to the same plane, which is called the ecliptic. It gets its name from the fact that when the moon passes in front of the sun or when Earth's shadow falls on the moon, an eclipse occurs.

Of all objects in Earth's sky, the moon appears to move the fastest, completing its journey around the Earth in just under a month. Measured against the sun, the moon repeats its phases every 29.4 days, while measured against the stars, it takes 27.3 days. The difference is accounted for by the amount the Earth moves in a month.

Most of the time, observers can't see a new moon — for two reasons. First, it is too close to the brilliant sun. Second, the side of the moon that faces Earth during a new moon is completely in shadow, because the sun is lighting the moon's far side. The only exceptions are the rare occasions when the moon passes directly in front of the sun, causing a solar eclipse, as happened last month. Then the moon appears in silhouette against the sun.