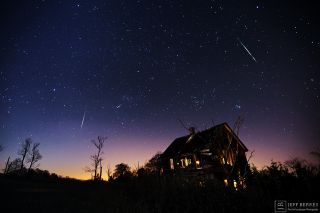 Veteran astrophotgrapher Jeff Berkes captures dazzling meteors over a house in New Jersey during the Leonid meteor shower of 2012. The 2014 Leonids will peak overnight on Monday and Tuesday (Nov. 17 and 18).
(Image: © Jeff Berkes)

The annual Leonid meteor shower peaks tonight and you can watch it live online.

The Leonid meteor shower has dazzled skywatchers in the past, but even if your view is hampered by bad weather or light pollution, you can still catch the show online via two webcasts airing tonight (Nov. 17) and into the wee hours of Tuesday morning. The Slooh Community Observatory will being its Leonid meteor shower webcast at 8 p.m. EST (0100 GMT), and a NASA webcast is scheduled to start at 7:30 p.m. EST (0030 GMT).

You can watch both Leonid webcasts on Space.com. "We're predicting 10 to 15 meteors per hour," Bill Cooke, head of NASA's Meteoroid Environment Office at the agency's Marshall Space Flight Center in Alabama, said in a blog post. "For best viewing, wait until after midnight on Nov. 18, with the peak of the shower occurring just before sunrise." [Amazing Leonid Meteor Shower Photos]

Slooh's webcast (which you can also watch directly at http://live.slooh.com/) will feature views of the meteor shower from telescopes in the Canary Islands and Arizona. NASA's broadcast will show live views from Marshall until sunrise Tuesday (Nov. 18).

The Leonid meteor shower is named for the constellation Leo, the spot where the meteors seem to radiate from in the night sky. The Leonid shower is created each year as Earth passes through the field of dust left behind after Comet Tempel-Tuttle speeds through the inner solar system every 33.5 years.

The Leonid meteor shower has been truly amazing in past years. In 2002, for instance, astronomers tracked meteor rates of a few thousand "shooting stars" per hour, but Space.com skywatching columnist Joe Rao warns that observers shouldn't get their hopes for an incredible show like that this year.

Meteor shower predictions suggest that there won't be much significant activity from the Leonid's peak this week because of Comet Tempel-Tuttle's spot in orbit, Rao said. The comet is currently nearing its farthest point from the sun, meaning that most of the bits of debris sloughed off by the icy wanderer will be concentrated near that far point in its orbit, away from Earth.

"In contrast, at the point in the comet's orbit where we will be passing by on Tuesday morning, there is nothing save for a scattered few particles; stragglers likely loosed from the comet's nucleus a millennium or two ago," Rao wrote in a Leonid meteor shower forecast.

Some dedicated meteor hunters still plan to stay up late to catch the Leonids. That includes veteran night sky photographer Jeff Berkes in Pennsylvania, who has captured spectacular photos of the Leonids and other night sky views more than 20 years.

In 2012, Berkes captured the stunning view included in this guide of two Leonid meteors streaking over an abandoned old house in New Jersey. He lit the house with halogen flashlight on its first floor to help set the mood. "Even though the rates [vary], it only takes one good meteor to give you a life-long memory!" he told Space.com in an email.

"For us in the northeast a departing storm may interfere with observations but I am still going to go out and give it a shot," Berkes said. "If you are like me and are surrounded by light pollution for hundreds of miles. Don't let that keep you inside! It has never kept me from venturing out."

Editor's note: If you snap an amazing photo of the Leonid meteor shower and you would like to share it for a possible story or image gallery, send your images and a description of the view and equipment in to managing editor Tariq Malik at spacephotos@space.com.