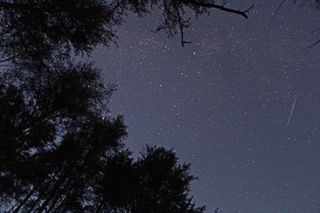 In recent days, I've been hearing the excited murmurings of skywatchers: "The Leonids are coming!" That is indeed true. In fact, the Leonids are expected to reach their peak before dawn on Tuesday (Nov. 18).

No doubt, some folks are visualizing a sky filled with shooting stars pouring down through the sky like rain. Such meteor storms have indeed occurred with the Leonid meteor shower, such as in 1833 and 1966 when meteor rates of tens of thousands per hour were observed. In more recent years, most notably 1999, 2001 and 2002, lesser Leonid displays of up "only" a few thousand meteors per hour took place.

Those turn-of-the-century Leonid showers — and their accompanying hype — are what are remembered by many. So I think it is important to stress here at the outset that any suggestion of a spectacular meteor Leonid display this year is, to put it mildly, overly optimistic. [Amazing Leonid Meteor Shower Photos]

In fact, the 2014 Leonid meteor shower is more than likely to be a major disappointment chiefly because of the expected lack of any significant activity. It is for this reason then, that although the Leonids are one of the most famous of all the annual meteor displays we certainly would not advertise them as a major shower this year, especially to a newcomer to meteor observing, since they likely will be weak and there probably will be long stretches when not a single Leonid will be seen.

If bad weather or light pollution spoils your meteor display, you can also catch them online in two free webcasts Monday night by NASA and the Slooh Community Observatory. The Slooh.com webcast will begin at 8 p.m. EST (0100 GMT) and feature views of the night sky from the observatory's telescopes in the Canary Islands and Prescott, Arizona. NASA's webcast begins at 7:30 p.m. EST (0030 GMT) and will include a telescope view from the agency's Marshall Space Flight Center in Alabama.

You can watch the Leonid meteor shower webcasts on Space.com, courtesy of Slooh and NASA.

Crumbs from a comet

The Leonid meteor shower gets its name because the shower's radiant point, from where the meteors seem to fan out, is located within the constellation of Leo, the Lion, from the backward question mark pattern of stars known as The Sickle." The meteors are caused by the Comet Tempel-Tuttle, which sweeps through the inner solar system every 33.5 years.

Each time the comet passes closest to the sun it leaves a "river of rubble" in its wake; a dense trail of dusty debris. A meteor storm becomes possible if the Earth were to score a direct hit on a fresh dust trail ejected by the comet over the past couple of centuries.

The "lion's share" (no pun intended) of comet dust can be found just ahead and trailing behind Tempel-Tuttle. That comet swept through the inner solar system in 1998. That's why spectacular meteor showers were seen in 1999, 2001 and 2002, with declining numbers thereafter.

This year finds Comet Tempel-Tuttle nearing the far end of its elongated orbit. In 2010, the comet crossed the orbit of Uranus and in 2016 it will be as far from the sun as it can get: 1.84 billion miles (2.96 billion km). That's not only where the comet is, but also where the heaviest concentrations of meteoroids are as well. In contrast, at the point in the comet's orbit where we will be passing by on Tuesday morning, there is nothing save for a scattered few particles; stragglers likely loosed from the comet's nucleus a millennium or two ago.

So the 2014 Leonids are expected to show only low activity this year; "maybe" at best 5 to 10 Leonids per hour might be seen. The moon will rise at around 2:40 a.m. your local time, but it will pose very little interference, being just a very thin crescent.

How to observe the Leonids: What you'll see

Watching a meteor shower consists of lying back, looking up at the sky … and waiting. Keep in mind that any local light pollution or obstructions like tall trees or buildings will further reduce your chances of making a meteor sighting. [Meteor Shower Quiz: Do You Know Your Shooting Stars?]

The constellation Leo does not start coming fully into view until the after midnight hours, so that would be the best time to concentrate on looking for Leonids. As dawn is about to break at around 5 a.m. your local time, The Sickle will have climbed more than two-thirds of the way up from the southeast horizon to the point directly overhead (called the zenith). Brilliant Jupiter will not be too far away, shining like a dazzling non-twinkling silvery "star" to the west (right) of The Sickle.

Also, because the Leonids are moving along in their orbit around the sun in a direction opposite to that of Earth, they slam into our atmosphere nearly head-on, resulting in the fastest meteor velocities possible: 45 miles (72 km) per second. Such speeds tend to produce bright meteors, which leave long-lasting streaks or vapor trains in their wake.

A mighty Leonid fireball can be quite spectacular, but such outstandingly bright meteors are likely to be very few and very far between this year (if any are seen at all).

So, here’s the bottom line: If you plan to brave the chill of a mid-November morning, and the prospects of catching a glimpse of only a few Leonids, well … you should get an award for perseverance. Good luck!

Editor's note: If you snap an amazing photo of the Leonid meteor shower and you would like to share it for a possible story or image gallery, send your images and a description of the view and equipment in to managing editor Tariq Malik at spacephotos@space.com.