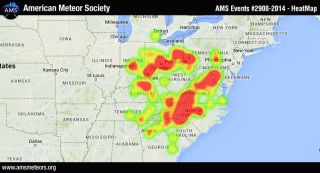 This heat map shows the locations of people who reported seeing a fireball above the eastern United States on Nov. 3, 2014.
(Image: © American Meteor Society)

Three brilliant fireballs - two from space and one apparently made by humans - lit up skies over the U.S. on Monday, prompting hundreds of reports by surprised skywatchers.

The first fireball - the general name given to objects that shine brighter than the planet Venus as they streak through the sky - appeared over Arkansas at 9:30 a.m. CST; the second was spotted over Chicago at about 6:30 p.m. CST; the third appeared over West Virginia at about 6:22 p.m. EST. The objects over Arkansas and West Virginia appear to be meteors, but the object over Chicago now seems to be man-made.

Spectator Steve Sobel captured the last few seconds of what initially appeared to be a meteor moving through the eastern sky of Chicago. Another video posted on Tuesday, however, revealed that the event was a marketing stunt by Red Bull. [Meteor Shower Quiz: How Well Do You Know 'Shooting Stars'?]

The Red Bull video is dark, but appears to show at least one person jump out of a plane in a wingsuit over Chicago's Lake Michigan shoreline. One of the flyers releases a bright stream of sparks behind him. According to the video description, the flyers landed safely.

Bill Cooke, head of NASA's Meteorite Environment Office at the Marshall Space Flight Center, initially said that the Chicago meteor was "a bit of a puzzle." Cooke explained that in the video by Steve Sobel, the object was moving "much slower than a normal meteor." Normally that might mean the object was man-made space junk, falling through the atmosphere. But Cooke also said there were no reported re-entries over the US that night.

The most visible of the three Monday fireballs was spotted over West Virginia, but sightings were reported as far north as Pennsylvania and as far south at Georgia. More than 500 people have made reports on the American Meteor Society website.

Cooke told Space.com that the object was roughly as bright as a quarter moon, was definitely a space rock, and was "probably the size of a softball or baseball."

Because the fireball traveled west to east, it was not a Taurid meteor, Cooke added. From September to November, the northern and southern Taurid meteor showers pepper Earth with meteorites that appear to originate in the constellation Taurus. This year, the first meteors in the northern Taurid shower were seen on Oct. 31, and Cooke said skywatchers should expect to continue to see them through the weekend.

The fireball seen over Arkansas was most likely a Taurid meteor, according to Cooke. Based on a handful of witness reports, it moved from east to west. Cooke estimates it was "probably as bright as a crescent moon or a quarter moon."

The American Meteor Society has now received just over 40 reports on the Arkansas fireball, but Cooke says many more people wrote about it on Twitter. Cooke's office uses Twitter to get a better idea of when a meteor crossed the sky: While most people can only vaguely remember at what time they saw a meteor, a post on Twitter (usually created immediately after the sighting) creates a concrete time stamp.

Cooke says two meteor fireballs in one day is not a higher-than-usual occurence.

"People see fireballs all over the Earth, every night of the year," Cooke added. "This is not unusual for this time of the year."

He also notes that with daylight saving time in effect, more people are leaving work when the sky is dark, which would increase the odds of people being outside to see these objects. Because the Taurid meteor shower should continue through the weekend, Cooke says he is "expecting people to report a few more fireballs over the next few days."

Next year's Taurid meteor showers are expected to be more intense than usual.

"If our forecasts are accurate," Cooke said, "Next year around Halloween, we can expect even more fireballs."

Editor's Note: If you took an amazing picture of one of the Monday fireballs or any other skywatching photo you'd like to share for a possible story or image gallery, please contact managing editor Tariq Malik at spacephotos@space.com.