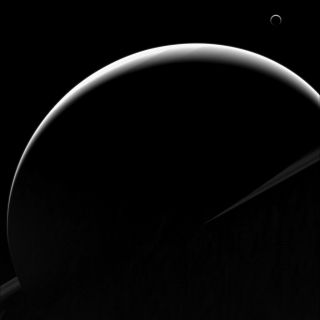 An amazing photo taken by a NASA probe shows Saturn and its large moon Titan shining as pretty crescents in deep space.

The two cosmic bodies were imaged by the Cassini spacecraft, which has been exploring the Saturn system for about 10 years. The image — released on Monday (Nov. 3) — was captured as the robotic ship was flying about 1.1 million miles (1.7 million kilometers) from the ringed wonder on Aug. 11, 2013, according to NASA. Some of Saturn's ring plane can even be seen in the black and white image.

"More than just pretty pictures, high-phase observations — taken looking generally toward the sun, as in this image — are very powerful scientifically since the way atmospheres and rings transmit sunlight is often diagnostic of compositions and physical states," NASA officials said in an image description. "In this example, Titan's crescent nearly encircles its disk due to the small haze particles high in its atmosphere scattering the incoming light of the distant sun."

Cassini has taken many photos of Titan during its time at Saturn. A recently released view of the moon shows both of the moon's north polar seas reflecting sunlight, a view that has never been seen by scientists on Earth.

Titan is Saturn's largest moon, and it is the only other body in the solar system (aside from Earth) that is known to have liquid on its surface. However, unlike Earth, Titan's liquid is in the form of liquid methane and ethane, not water, NASA officials have said.

"Before Cassini's arrival at Saturn, scientists suspected that Titan might have bodies of open liquid on its surface," NASA officials said in a statement. "Cassini found only great fields of sand dunes near the equator and lower latitudes, but located lakes and seas near the poles, particularly in the north."

Cassini launched to space in 1997. It arrived in the Saturn system in 2004, and has been beaming back information about the ringed planet ever since. The probe's mission should continue until at least 2017, when the craft will intentionally plunge into Saturn's atmosphere, ending its time studying the system, and burning up harmlessly in the planet's atmosphere.