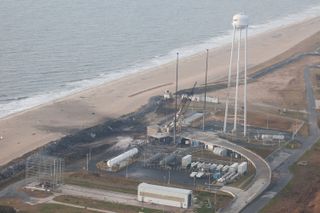 This image shows the aftermath of the Antares rocket explosion, which took place on Oct. 28, 2014. The photo was taken from the air on Oct. 29.
(Image: © NASA/Terry Zaperach)

Officials with NASA, the Federal Aviation Administration and Orbital Sciences have been working toward understanding what caused the massive failure of the rocket, but they have not found the root cause of the accident yet. The rocket mishap took place on a launch pad at NASA's Wallops Flight Facility on Wallops Island, Virginia. The Antares was carrying an unmanned Cygnus spacecraft loaded down with supplies for the International Space Station at the time of the explosion. Orbital Sciences holds a contract with NASA to fly these robotic resupply missions to the orbiting outpost.

The Accident Investigation Board (IAB) will first work on putting together the proper timeline of events during the launch, according to Orbital. "Due to the large amount of data available, the AIB is able to work with a rich source of information about the launch," Orbital officials said in an update Wednesday (Nov. 3). "One of the initial tasks for the AIB is to reconcile the data from multiple sources, a process that is now underway, to help create the launch sequence timeline." [Read more news about the Antares explosion]

David Steffy, the Chief Engineer of Orbital’s Advanced Programs Group, has been chosen as the chairman of the Accident Investigation Board. Other members of the board are: