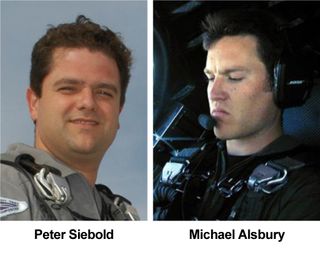 Scaled Composites test pilots Peter Siebold and Michael Alsbury were aboard Virgin Galactic's SpaceShipTwo during its failed powered test flight on Oct. 31, 2014 over California's Mojave Desert. Alsbury was co-pilot of SpaceShipTwo and died in the crash. Siebold is Scaled's director of flight operations and survived.
(Image: © Scaled Composites)

Scaled Composites, the aerospace company that built and tested the commercial SpaceShipTwo space plane for Virgin Galactic, has released a statement identifying the pilots in the spacecraft's tragic crash on Friday (Oct. 31).

An investigation team from the National Transportation Safety Board has visited the crash site and will hold a press conference at 11 p.m. ET/8 p.m. PT. You can follow the NTSB investigation directly here: http://www.ntsb.gov/investigations/2014/mojave_ca/mojave_ca.html

Scaled representatives asked that the privacy of the families of Siebold and Ashbury be respected during this difficult time.

"We remain focused on supporting the families of the two pilots and all of our employees, as well as the agencies investigating the accident. We ask at this time that everyone please respect the privacy of the families."

More details on the SpaceShipTwo pilots and the crash will be posted on Space.com following the NTSB briefing tonight.