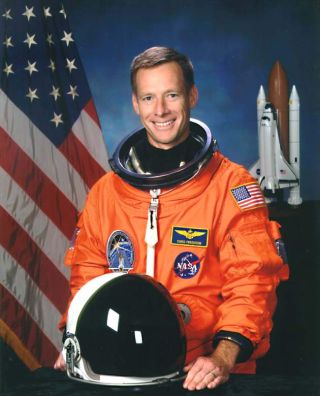 He was temporarily assigned to the Naval Test PilotSchool at Naval Air Station (NAS) Patuxent River, Maryland prior to commencingflight school in Pensacola, Florida in November 1984. Following flight trainingin Florida and Texas, he received his Navy wings and was ordered to the F-14replacement training squadron in Virginia Beach, Virginia, where, after a ninemonth period of instruction, he joined the 'Red Rippers' of VF-11.

With VF-11 he made deployments to the North Atlantic,Mediterranean and Indian Ocean on board the USS Forrestal (CV-59). While withVF-11 he also attended the Navy Fighter Weapon School (TOPGUN). He was selectedfor the Naval Postgraduate/Test Pilot School program in 1989 and graduated withclass 101.

From July 1992 through June 1994 he was assigned tothe Ordnance Branch of the Strike Aircraft Test Directorate at NAS PatuxentRiver. There he served as the project officer for the F-14D weapon separationprogram where he became the first to release numerous air-to-ground stores fromboth the A and D model of the Tomcat.

In July 1994, he was chosen to instruct at the NavalTest Pilot School which he did so until July 1995. After a brief retrainingperiod he joined the 'Checkmates' of VF-211 where he completed a deployment tothe Western Pacific/Persian Gulf aboard the Nimitz (CVN-68) in supportOperation Southern Watch and contingency operations off the coast of Taiwan. Hebriefly served as the F-14 Class Desk Officer for the Commander Naval AirForce, Atlantic Fleet prior to his selection to the space program.

The mission is targeted to launch in 2006.