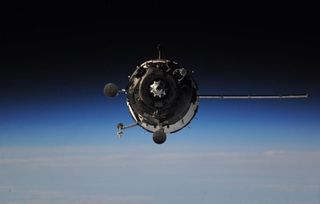 A Russian TMA-14M spacecraft arrives at the International Space Station with just one solar array deployed on Sept. 25, 2014. The Soyuz made it safely to the station to deliver three new members of the outpost's Expedition 41 crew. This photo was taken by NASA astronaut Reid Wiseman from inside the station.
(Image: © Reid Wiseman/NASA via Twitter as @Astro_Reid)

When a Russian Soyuz spaceship pulled up to the International Space Station last week, it had a distinctly off-kilter look due to a stuck solar wing.

While a NASA video of the Soyuz's arrival on Sept. 25 only showed the asymmetrical spacecraft from afar, this amazing photo from American astronaut Reid Wiseman gives a crystal clear view of what a one-winged Russian spaceship looks like up close.

Wiseman snapped the photo from inside the International Space Station as he watched the Soyuz TMA-14M spacecraft dock itself flawlessly at the orbiting lab. The Soyuz launched three new crewmembers to the space station to join the outpost's current Expedition 41 crew. But shortly after reaching orbit, one of the Soyuz's two solar arrays failed to deploy.

"Awesome view of the Soyuz with only one array deployed," Wiseman wrote in a Twitter post last Saturday (Sept. 27). "Flown by the best!"

Russian cosmonaut Alexander Samokutyaev was in command of the Soyuz during its six-hour trip to the space station. NASA astronaut Barry Wilmore and cosmonaut Elena Serova accompanied Samokutyaev on the flight.

The Soyuz crew reported no problems at all with the flight despite the stuck solar array. On Earth, Russian flight engineers were concerned the problem could cause overheating on the spacecraft, but the crew reported that everything was fine inside the capsule throughout the flight.

Wiseman and his Expedition 41 crewmates Maxim Suarev of Russia and Alexander Gerst of the European Space Agency are in the middle of a months-long voyage to the International Space Station. They are due to return to Earth in November.

Samokutyaev, Wilmore and Serova, meanwhile, are just beginning their own six-month spaceflight. They will stay aboard as the station's core Expedition 42 crew and return home in March 2015.