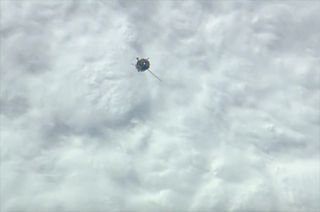 A Soyuz TMA-14M spacecraft, with only one of its two solar arrays deployed, is seen nearing the International Space Station on Sept. 25, 2014 (Eastern Time) to deliver three new members of the Expedition 41 crew. The stuck solar array did not hinder the Soyuz capsule's single-day trip to the space station.
(Image: © NASA TV)

A Russian-built Soyuz capsule carrying a crew of three reached the International Space Station late Thursday (Sept. 25), despite a stuck solar array that failed to deploy just after its launch six hours earlier.

The Soyuz TMA-14M spacecraft linked up with the station at 10:11 p.m. EDT (0211 GMT) as the two spacecraft sailed high over the Pacific Ocean. The Soyuz arrived at the space station with American astronaut and two Russian cosmonauts — including Elena Serova, the first female cosmonaut ever to visit the International Space Station.

Russia's Soyuz vehicles are three-person spacecraft made up of a crew capsule, orbital module and service module powered by two winglike solar arrays. Initially, Russian engineers were concerned the stuck portside solar array would block a radiator and lead to hotter temperatures inside the Soyuz, but the capsule's crew reported all was well, NASA officials said.  [See launch photos of the Soyuz TMA-14M spacecraft]

The Soyuz clearly had enough power for a smooth docking, despite being at half-capacity.

"The solar array is still not deployed?" Russia's Mission Control asked the Soyuz crew as the craft neared the station.

"No, but the power situation is fine. It just doesn't look good from the point of view of photographs," Soyuz commander Alexander Samokutyaev radioed back. "We're eating and drinking, and we're being merry. Everything is as it should be."

The docking occurred just hours after a flawless launch from the Baikonur Cosmodrome in Kazakhstan, where Serova and her crewmates — NASA astronaut Barry "Butch" Wilmore and cosmonaut Alexander Samokutyaev — bid farewell to Earth to begin a nearly six-month space mission. Trio joined three other space travelers already aboard the station: astronaut Reid Wiseman of NASA; Alexander Gerst of the European Space Agency; and Russian cosmonaut Maxim Suarev, who commands the station's Expedition 41 crew.

Wiseman said he and his Expedition 41 crewmates watched a live video feed of the launch and even captured a photo of the liftoff from space, which he posted on Twitter.

"That looked like a good ride," Wiseman radioed down to NASA's Mission Control in Houston. "We look forward to seeing them in orbit, and we'll have dinner ready waiting for them."

The Soyuz crew was due to enter the space station at about 11:55 p.m. EDT (0355 GMT) to join the station team, as well as receive congratulatory calls from their family and officials in Russia's Mission Control Center. Serova, Wilmore and Samokutyaev will live and work aboard the International Space Station until March 2015. Wiseman, Gerst and Suarev are due to return to Earth in November of this year.

Russia's Soyuz spacecraft are currently the only option for NASA to fly American astronauts to and from the International Space Station. Last week, the space agency awarded contracts to the commercial spaceflight companies of Boeing and SpaceX to begin flying NASA astronauts to the station on private U.S.-built space taxis by 2017.

Editor's note: This story was updated at 9:33 a.m. EDT to include more details on NASA's plans for U.S. flights to the station, and to clarify the exchange between the Soyuz crew and Russia's Mission Control.