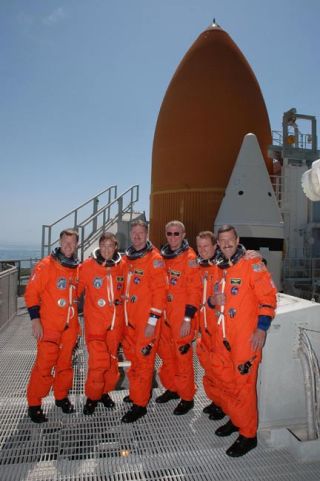 HOUSTON -With their launch date inching ever closer, six shuttle astronauts are eagerly lookingforward to rocketing toward the International SpaceStation (ISS) with a set of solararrays in tow.

Atlantis' STS-115astronaut crew is slated to launch Aug. 27 on a complex missionto resume construction of the half-built ISS.

"This is avery challenging and complex assembly mission with a very aggressive timeline,especially over the first five to seven days," Atlantis shuttle commander BrentJett, who helped deliver the station's firstsolar arrays during NASA'sSTS-97 mission in 2000, told reporters here at NASA's Johnson Space Center Friday."This crew is ready to execute our part of that mission.

Theastronauts are preparing to deliver a 17.5-ton truss segment to the ISS alongwith two massive solar arrays that will ultimately span about 240 feet (73 meters)from end to end once deployed. The truss will be the first major addition tothe ISS since construction flights were tabled following to the 2003 Columbia accident.

"This, Ithink, really signifies the beginning of the culmination of the space station,"said Ferguson, who is making his first spaceflight during the STS-115mission. "You'll be seeing a series of assembly flights that have beenunparalleled in their complexity and their detail, and their timelines."

With threespacewalks, two shuttle heat shield inspections, some cargo delivery and the restartof ISS construction ahead of them, Atlantis' STS-115 astronauts have a lot ontheir plate.

The orbitalinspections, first used in NASA's twopost-Columbia test flights, are now standard activities to ensure anorbiter's protective tiles and wing edge panels have not been damaged by launchdebris - the problem that doomed Columbia.

"When we startedtraining for this mission about four and a half years ago, robotics was arelatively small operation that was going to take just a few hours, and then itwas going to be over," said Ferguson, who will help inspect Atlantis' heatshield in orbit. "Now it seems like robotics operations with the arm and theonboard [inspection] boom sensor system are going to take up the better part ofFlight Day 2 and an entire day after we undock."

Just after arrivingat the ISS on Flight Day 3, Atlantis astronauts will use the shuttle's arm tograpple their Port 3/Port 4 truss and solar array payload and swivel it out ofthe cargo bay for later installation at the end of the station's left - or port- side.

Two back-to-backspacewalks by the STS-115 mission specialists are scheduled to ready the newsolar arrays for deployment once the truss is mated to the ISS. One lastspacewalk, after the arrays are deployed, will finalize the installation.

"It'sdefinitely a very full mission, but one we're very, very eager to get startedwith," said Stefanyshyn-Piper, who like Ferguson is making her firstspaceflight during the flight.

Atlantis'STS-115 mission will mark the first of at least 15 planned shuttle-ISSconstruction flights since late2002.

"It will bea pleasure to leave the station in a much different configuration than when wefirst arrived," Ferguson said, adding that he hopes Atlantis will have enoughfuel to circle the station - for some parting photographs - after undocking. "I'dlike to think we are truly back on step."

Of theupcoming construction missions, the next few will be dedicated to adding threeadditional solar arrays to the station, where they will join a fourth already onboard.Among the remaining ISS segments to fly are two orbital laboratories, Europe's Columbus moduleand Japan's Kibocomponent, that will nearly double the station's habitable area from itscurrent size - about that of a three-bedroom home - to the equivalent of afive-bedroom dwelling.

"This is anexciting flight and this is an exciting time," Ferguson said. "I think we'reall proud to be a part of it."