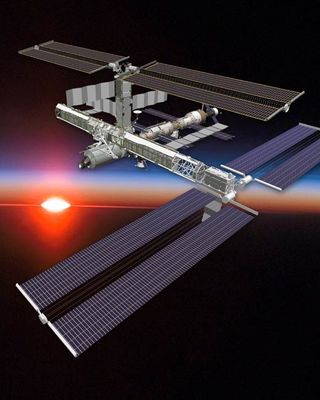 A computer generated view of the International Space Station after NASA's STS-115 mission, which will deliver the Port 3/Port 4 truss segment and two new solar arrays (right) to the orbital laboratory.
(Image: © NASA/JSC.)

HOUSTON - When NASA's space shuttle Atlantis launchestoward the InternationalSpace Station (ISS) this month, it will kick off an increasingly complexset of missions to complete the orbital laboratory, agency officials saidFriday.

Slated tolaunch toward the ISS on Aug. 27, Atlantis and its STS-115astronaut crew will haul a 17.5-ton addition to the space station's maintruss and twonew solar wings to double power production.

"It's great to be back flying an assembly mission," said STS-115 lead shuttleflight director Paul Dye during a press briefing here at NASA's Johnson Space Center today. "We've flown a couple of test flights where we've proven theshuttle's back and flies well. Now we're going to get back to the business of expandingthe space station and that's very exciting."

WithAtlantis' upcoming mission NASA is poised to resume an at least 15-shuttleflight sequence to complete the ISS by the orbiter fleet's 2010 retirement.

"You canimagine that in 18 shuttle flights, that's going to be a busy period for theprogram," said ISS program manager Michael Sufferdini, including NASA's recent STS-121mission and two reserve flights into his construction mission count. "Butit's why we're here and we're looking forward to the challenge."

At nearly 35,000pounds (15,875 kilograms), Atlantis' truss and solar array cargo is byfar the heaviest ISS element to ride in an orbiter cargo bay to date. It is designed togenerate about 20 kilowatts - about one-fourth of the station's power needs -or enough electricity to support about six average homes.

Installingthe $371.8-million truss segment, connecting its power and data lines to theISS, and deploying its twin solar arrays on the station's port side willrequire no less than three spacewalks by two teams of STS-115 astronauts.

To ensure asuccessful construction job, spacewalkers must work smoothly with flightcontrollers and engineers on Earth, as well as their fellow crewmates insidethe ISS and Atlantis.

NASA's STS-115mission is just the start of an ambitious plan to complete the ISS.

It willtake one more shuttle flight - STS-116 aboard Discovery set to launch on Dec.14 - to bring the station's new solar arrays online, then two more spaceflightsto deliver two additional massive power modules to the orbital lab. A fourthsolar array is already aboard the ISS, but will have to be moved into its finalposition during an upcoming shuttle flight.

Once allfour solar arrays are in place and functioning, the real heavy lifting beginsto launch long-waiting modules and international laboratories toward theoutpost.

But despitethe daunting path that lies ahead, station managers are confident they will hittheir target.

"We have preparedlong and hard for this," Sufferdini said of the road ahead for the ISS. "Thisis what we've been planning for, this is what we've trained for, so we're readyto go do this assembly task."