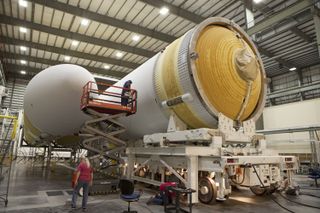 The two stages of the Delta 4 Heavy rocket that will launch NASA's Orion capsule on its first test flight come together inside the Horizontal Integration Facility at Florida's Cape Canaveral Air Force Station in September 2014.
(Image: © NASA/Daniel Casper)

NASA's next crewed spaceship is one step closer to taking flight for the first time.

"The hardware for Exploration Flight Test-1 is coming together well," Merri Anne Stowe, of NASA's Fleet Systems Integration Branch of the Launch Services Program, said in a statement today (Sept. 26). "We haven't had to deal with any serious problems. All of the advance planning appears to be paying off." [Orion: NASA's Next Crewed Spaceship (Photos)]

The rocket-assembly work took place at ULA's Horizontal Integration Facility (HIF) at Cape Canaveral Air Force Station in Florida and was led by ULA. First, engineers attached three elements known as Common Booster Cores to build the rocket's first stage. Each core is 134 feet long by 17 feet wide (42 by 5.2 meters), and together they generate 1.96 million pounds of thrust.

This work was done by early August, NASA officials said. The second stage — which is 45 feet long by 17 feet wide (13.7 by 5.2 m) and generates 25,000 pounds of thrust — was then mated to the first stage's central core in mid-September.

Technicians will soon check out the rocket stages to make sure all is well, then conduct a "test readiness review."

"These meetings are held to bring together all the interested parties to be sure the Delta 4 rocket is ready for the move to the launch pad where the Orion spacecraft will be mated," Stowe said.

Orion is a crew capsule designed to carry NASA astronauts to deep-space destinations such as asteroids and Mars. During manned missions, Orion will launch atop the agency's Space Launch System (SLS) mega-rocket.

This unmanned test flight will send Orion 3,600 miles (5,800 km) from Earth. Four hours later, the capsule will re-enter the planet's atmosphere at 20,000 mph (32,190 km/h), generating and enduring temperatures as high as 4,000 degrees Fahrenheit (2,200 degrees Celsius) before splashing down in the Pacific Ocean.

The goal is to see how Orion's critical crew-safety systems perform in a real flight environment, NASA officials have said. Data gathered during the test will inform future work on the capsule, which is slated to fly astronauts for the first time in 2021.