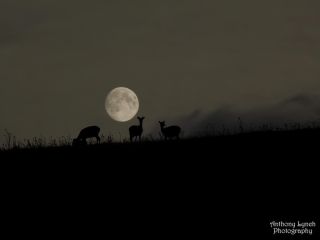 Deer graze in the foreground of this stunning image of the full Harvest Moon captured in 2013.
(Image: © Anthony Lynch)

The full Harvest Moon will light up the night sky on Monday (Sept. 8), and this year it comes with an extra bounty. September's full moon will cap a trio of back-to-back "supermoons" for the Northern Hemisphere summer, according to NASA.

The moon will reach its full phase when it reaches the spot in the sky opposite from the sun. That moment will occur Monday at 9:38 p.m. EDT (0138 GMT). Monday's full moon is the one nearest to the September equinox this year, giving it the moniker of Harvest Moon by the usual definition.

Although we associate the Harvest Moon with autumn, this year's version is actually the last full moon of the summer season. The 2014 Harvest Moon comes about as early in the calendar as possible. However, Harvest Moons can occur as late as Oct. 7. [Amazing Photos of the 2013 Harvest Moon]

This full moon also marks the third in a trilogy of "supermoons" this summer. July and August's full moons both fell during the moon's perigee — when it was at the closest point in its orbit to Earth. While the August supermoon was the closest, this month's full moon also falls during perigee.

Many think that the Harvest Moon remains in the night sky longer than any of the other full moons we see during the year, but that is a myth. The Harvest Moon's claim to fame is that instead of rising its normal average of 50 minutes later each day, it rises only a little later each night, providing farmers with extra moonlit evenings to reap their crops.

This unusually small daily lag in the time of moonrise occurs because the moon is traveling along the part of the ecliptic — the apparent path of the sun with respect to Earth's sky — that makes the smallest angle with the eastern horizon as seen from northern latitudes.

Through the course of three nights — Sept. 7 to Sept. 9 — the rising of the moon comes just under 38 minutes later each night, based on an average taken from a small sample of North American cities. The night-to-night difference in moonrise times is greatest for the more southerly locations. (Miami, for instance, sees moonrise come an average of 46 minutes later in the three-night sample).

Great Harvest Moon of the north

The Harvest Moon effect is greater the farther north an observer is located.

In contrast, for those living in the Southern Hemisphere, the ecliptic at this time of year appears almost perpendicular (at nearly a right angle) to the eastern horizon. As such, the difference for the time of moonrise exceeds the average of 50 minutes per night. In Sydney, Australia, for instance, the night-to-night difference amounts to 70 minutes.

For those who live near the Arctic Circle, however, the moon does indeed appear to rise about the same time each night around the time of the Harvest Moon. And for those who live even farther to the north, a paradox: The moon appears to rise earlier, not later.

Editor's Note: If you take an amazing image of the Harvest Moon or any other night sky view that you'd like to share for a possible story or image gallery, please contact managing editor Tariq Malik at spacephotos@space.com.