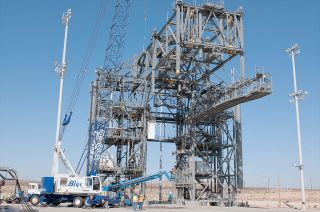 The space shuttle Mate-Demate Device that stood as an iconic symbol of NASA's now-concluded Space Shuttle Program at NASA Armstrong Flight Research Center for 38 years is being dismantled after no further use could be identified for the unique structure.
(Image: © NASA)

The historic steel tower that for 30 years was used to mount NASA space shuttles atop jumbo jets to fly them cross-country after they landed in California is now being demolished.

The gantry-like, gray and red Mate-Demate Device (MDD) at the NASA Armstrong (formerly Dryden) Flight Research Center in southern California stood for four decades. Now, three years after the shuttle program ended and six years since it last supported the turnaround of an orbiter landing at Edwards Air Force Base, the 110-foot (34 meters) structure is disappearing from the dry lake bed's skyline.

"It's sad to see something like this go, especially because it has a lot of history," said George Grimshaw, the center's last shuttle landing and recovery manager, in an interview with collectSPACE.com. "There is really nothing like it around. Yet, at the same time, you just can't have facilities sitting around unused, wasting away." [How NASA Moved Space Shuttles Across the U.S. (Photos)]

Construction of the $1.7 million Mate-Demate Device was completed in 1976 in support of the approach and landing tests by the prototype shuttle Enterprise. It was then used for a total of 54 space shuttle missions beginning with the first flight, Columbia's STS-1, in April 1981.

The MDD was last used in September 2009 to mount the space shuttle Discovery on top of the modified Boeing 747 Shuttle Carrier Aircraft for its return to the Kennedy Space Center in Florida after the STS-128 mission.

"STS-128 was the last time that we used the MDD with an orbiter," Grimshaw said. "Of course, we kept it maintained and ready to go up till the end of [the final shuttle mission] STS-135."

The facility was comprised of two 100-foot (30.5 m) towers with stationary work platforms at the 20-, 40-, 60- and 80-foot levels on each tower. A horizontal structure, spanning the two towers, controlled and guided a large lift beam that attached to the orbiters to raise and lower them.

Three large hoists were used to raise and lower the beam, each with a 50-ton (100,000-lbs.) lift capability. Operating together, the total lifting capacity of the three units topped out at 120 tons (240,000 pounds).

The shuttle orbiters weighed about 85 tons (170,000 lbs.), less the mass of their mission payloads.

A similar structure, also referred to as the MDD, stands at the end of the Shuttle Landing Facility at Kennedy Space Center. It lacked however, a key capability of the tower at Armstrong.

"The on at Kennedy was not built for servicing, so I don't believe it had side access panels," Grimshaw described. "It was basically designed to raise and lower the orbiter, whereas ours was designed for servicing and preparing the orbiter for its ferry flight back to Florida."

The servicing platforms enabled access into the orbiters. At Kennedy, any servicing tasks needed were completed in large hangars called the Orbiter Processing Facilities.

A 25,000 square-foot hangar used with Armstrong's MDD is being repurposed for other projects at the center.

Pantano Demolition of Manteca, California, began dismantling the MDD on Aug. 19 under a $178,700 contract. The firm plans to recycle as much of the steel used in the structure as possible for future utilization.

Prior to the demolition beginning, Grimshaw and his team sought other uses for the Mate-Demate Device, including supporting NASA's next crewed spacecraft, Orion, and for use by the Air Force.

"It was just too much (device) for what their requirements called for," Grimshaw said.

A federally-mandated "recordation" effort documented the structure's design and history for future reference. In 2011, the California Science Center briefly evaluated moving the MDD to Los Angeles to be displayed along with the retired space shuttle Endeavour.

"The Mate-Demate Device isn't something you can move where there would be public access and it was not in the cards that we'd ever be able to allow public access out to it," Alan Brown, news chief at the NASA Armstrong Flight Research Center, told collectSPACE.com. "So, that was pretty much off the table."

Instead, the center is setting aside smaller components of the historic tower for their museum exhibit, including at the science center.

Click through to collectSPACE.com to watch a short NASA documentary about the Mate-Demate Device (MDD).