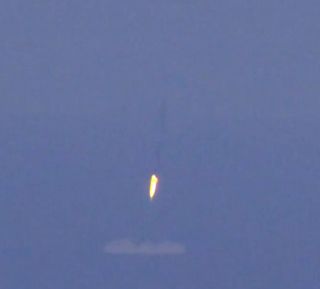 SpaceX's Falcon 9 rocket's boost stage made a landing in the Atlantic Ocean after delivering six satellites to orbit on July 14, 2014.
(Image: © SpaceX)

An amazing new video shows a stage of the private spaceflight company SpaceX's Falcon 9 rocket make a soft splashdown in the ocean after delivering six satellites to space.

The newly released video shows a view of the splashdown, which took place on July 14, from the perspective of a plane chasing the re-entry and landing in the Atlantic Ocean. You can watch the 1-minute splashdown video on Space.com. The Falcon 9 stage appears to come down toward the water at an angle before its rockets fire, slowing its descent.

"Towards the end of the video, the camera operator attempted to zoom in and, unfortunately, lost sight of the stage and was unable to capture the tip-over into the water," SpaceX representatives wrote in a video description. [See more photos of the July SpaceX launch]

This is the second video of the successful reusable rocket test. SpaceX also recorded more footage from the splashdown using an onboard camera that captured the test from the actual rocket.

The test gave SpaceX representatives some useful data that could be applied to future tests.

"This test confirms that the Falcon 9 booster is able [to] consistently re-enter from space at hypersonic velocity, restart main engines twice, deploy landing legs and touch down at near-zero velocity," SpaceX representatives wrote in a July update about the onboard camera video.

SpaceX lofted six commercial satellites into orbit on July 14, before performing the flyback test with the Falcon 9. The California-based private spaceflight company has been mounting these tests to help it make reusable rockets a reality in the future.

Elon Musk, the company's billionaire CEO and founder, believes that reusable rockets could cut the cost of access to space by as much as a factor of 100. He thinks that these kinds of innovative ideas could make manned exploration, and even colonization of Mars, a viable economic possibility.

SpaceX has attempted three first-stage Falcon 9 returns after launches. The first happened in September 2013, and the second occurred in April, after the company sent its unmanned Dragon capsule on its way to deliver cargo to the International Space Station.

The April launch was a more successful test than the one performed in September. In April, the Falcon 9 stage made a soft landing in the ocean before rough weather destroyed the stage. Engineers were able to relight the boost stage twice in September 2013, but the Falcon 9 hit the water too hard when it came back for splashdown.