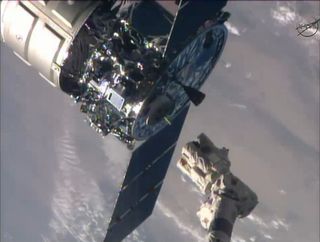 The Cygnus spacecraft as seen when it was released from the International Space Station on Aug. 15, 2014.
(Image: © NASA (via Twitter as @NASA))

A private cargo ship loaded down with trash left the International Space Station Friday morning (Aug. 15). Orbital Sciences' Cygnus spacecraft is due to plunge into Earth's atmosphere, burning up above the Pacific Ocean on Sunday (Aug. 17).

The Cygnus craft launched to space on July 13 with close to 3,300 lbs. (1,496 kilograms) of supplies for the six astronauts on the orbiting outpost. "A flock of nanosatellites was also shipped to the station aboard Cygnus for future release from the Kibo laboratory module’s airlock beginning next week," NASA officials said in a statement. "Individually known as “Dove” satellites, the group will collect continuous Earth imagery documenting natural and man-made conditions of the environment to improve disaster relief and increase agricultural yields."

Virginia-based Orbital Sciences is one of two private companies that fly unmanned missions to the International Space Station for NASA. The departure of Cygnus marks the end of the company's second mission to the space laboratory under a $1.9 billion contract for eight resupply missions. The other company, SpaceX, uses its Dragon capsule and Falcon 9 rocket to bring cargo to the station under a $1.6 billion NASA deal for 12 missions. [See photos of the 2nd Cygnus cargo mission]