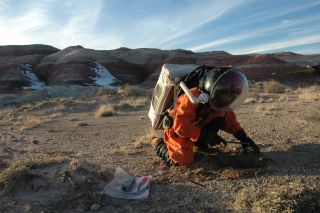 A mock Mars explorer digs into the surface of Earth, which serves as an analog for the Red Planet during an episode of "Man vs. the Universe."
(Image: © The Science Channel)

A new three-part series will shed light on humanity's ever-expanding place in the universe.

The Science Channel's new special "Man vs. the Universe" will cover everything from a private race to the moon to how scientists are trying to protect the planet from the threat of dangerous asteroids. The miniseries, set to air its first episode Wednesday (Aug. 13), aims to explore the new era of commercial and national space exploration..

"Space truly is the final frontier for humans," Rita Mullin, general manager at the Science Channel, said in a statement. "For the first time ever, we're taking proactive steps to protect ourselves from its perils, and use its vast resources to ensure our survival. This process features extraordinary ideas driven by astonishing feats of technology and engineering. We hope 'Man vs. the Universe' captures some of the remarkable work happening right now in this new race for space, and gives viewers an appreciation for the incredibly smart, creative, driven people doing this work." [Photos: Visions of Human Spaceflight]

"We're confident that we can fly a mission, but if there aren't enough payloads out there that believe that we can do that, then they won't show up at our doorstep and we won't ever be able to get a mission out the door," Peterson told Space.com. "A lot of what we do is try to line up these payloads, try to convince them that we're technically viable, try to convince them that we're financially viable. We've made a lot of progress doing that on our own, but this kind of global coverage is a really big deal for that cause."

The second episode of the show, which airs on Aug. 20, explains the ways engineers and scientists are working to hunt asteroids in order to keep them from slamming into Earth. According to the Science Channel, "How to Kill an Asteroid" will also describe NASA's asteroid capture mission, designed to tug a space rock into orbit around the moon, where astronauts can visit it.

"Mars is Ours" — the final episode of the series, expected to air on Aug. 27 — will do a deep dive into proposed Red Planet missions that could help humans colonize another world.

"An aerospace engineer is designing the spacesuit that will shield us from the harsh Martian environment and give us superhuman strength," Science Channel representatives wrote in a description of the episode. "SpaceX hopes to get to Mars in about two decades, but another space startup, Mars One, thinks it can get humans there in just 10 years. The only catch: It's a one-way trip, with no chance of ever coming home."

The first episode of "Man vs. the Universe" is scheduled to air Wednesday (Aug. 13) at 10 p.m. EDT/PDT on the Science Channel. Check local listings.