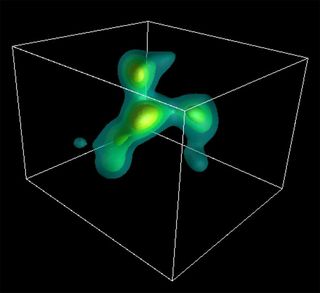 The filamentary structure in 3D. There are at least three intersecting filaments.
(Image: © National Astronomical Observatory of Japan)

An enormous amoeba-like structure 200 million light-years wide and made up of galaxies and large bubbles of gas is the largest known object in the universe, scientists say.

The galaxies and gas bubbles, called Lyman alpha blobs, are aligned along three curvy filaments that formed about 2 billion years after the universe exploded into existence after the theoretical Big Bang. The filaments were recently seen using the Subaru and Keck telescopes on Mauna Kea.

The galaxies within the newly found structure are packed together four times closer than the universe's average.

Some of the gas bubbles are up to 400,000 light years across, nearly twice the diameter of our neighboring Andromeda Galaxy. Scientists think they formed when massive stars born early in the history of the universe exploded as supernovas and blew out their surrounding gases. Another theory is that the bubbles are giant gas cocoons that will one day give birth to new galaxies.

The finding will give researchers new insight into what the structure of cosmos looks like at the largest scale.

"Something this large and this dense would have been rare in the early universe," said study team member Ryosuke Yamauchi from Tohoku University.

"The structure we discovered and others like are probably the precursors of the largest structures we see today which contain multiple clusters of galaxies," Yamauchi said.